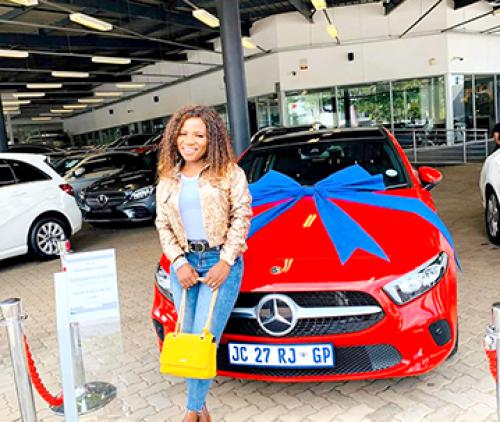 Makhadzi is a free artist now

The popular Queen of Tshivenda wedding songs, Ndivhudzannyi “Makhadzi” Ralivhona, announced last week that she had parted ways with her manager, Rita Dee, following a period of what she describes as “abuse”.

Speaking on behalf of Limpopo Artists Movement, who had intervened to help Makhadzi, Mpho “Mphoza” Mashabela announced on Vhembe FM that the verbal contract between Makhadzi and Rita Dee Entertainment had been terminated with immediate effect.

On Wednesday, Limpopo Mirror forwarded a media inquiry to Mashabela, but he kept saying he would respond shortly.

However, Mashabela has since told Sowetan that the Limpopo Artists Movement could “not tolerate [the abuse of artists]. There is no way we can allow artist's managers to do as they wish. Makhadzi worked really hard and she deserves better”.

He was also worried that Rita Dee “doesn't communicate well with Makhadzi on a number of things”.

Meanwhile, Rita Dee, who had been evading Limpopo Mirror ever since the news of the alleged abuse of Makhadzi surfaced last week, has issued a media statement in which, among other things, she denies that Makhadzi had appeared in 48 gigs last year, stating that it was only “about 21 gigs”. She stated that she had an “oral (agreement) with Makhadzi in terms of which she (Makhadzi) is entitled to 75% of the profits after all expenses have been met (transport, accommodation and more)”.

“For the recent gigs Makhadzi has been paid and the last payment was transferred to her FNB personal account on the 4th day of January 2020 while I was with her at Midrand,” she stated. “I have never been absent without leave on Makhadzi.”

She stated that Rita Dee Entertainment had agreed to buy two new cars for Makhadzi after the singer could not qualify for finance. The vehicles are a KIA Picanto and an Audi A1. Apparently, the Audi was involved in an accident on 27 January 2019 and was declared uneconomical to repair. “The insurance repudiated the claim and to date we are still servicing the monthly instalments of the said Audi,” said Rita Dee.

“As I respond to [Makhadzi's allegations that I am not paying her], I am in the process of obtaining the settlements for both cars as it only makes a business sense to me that she should pay off the cars she caused me to finance under my company as we all know that entertainment industry is a high risk business,” Rita Dee stated.

She pleaded “with fellow South Africans and/or anyone who is engaging themselves in threatening my life and my properties to desist from doing so as I will take harsh legal steps in protecting my life and brand”.

In concluding her media statement, Rita Dee wrote: “Any legal process which may be directed to me or Rita Dee Entertainment will be vigorously defended. In trust I remain.”

Meanwhile, Limpopo Mirror called Makhadzi, who she said that she was very busy and that interview questions should be sent to her WhatsApp number. This was subsequently done on Tuesday. By 10:00 on Wednesday, Makhadzi had not responded to the questions and her phones had been switched off.

However, the vibrant singer seems to have found some happiness in a new purchase – a new car. Social media are ablaze with an image of Makhadzi posing in front a red Mercedes Benz sports car and her friends and fans are congratulating her on her “new car”.