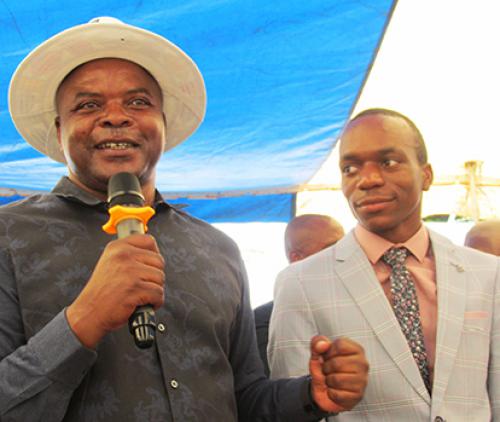 Musanda Vho-Tshinetise Tshedza Ravhura of Makonde village is only 17 years old and is in Grade 11 at Thengwe High School, but he said he would seek wisdom from God to rule his subjects diligently.

He said this immediately after officially assuming power to ascend to his throne during a high-profile event that was held at Makonde Musanda last week. Local villagers, traditional leaders, politicians, representatives of community structures and churches attended the occasion.

Vho-Tshedza was installed as Makonde village’s traditional leader by Thovhele Vho-Midiyavhathu Kennedy Tshivhase in 2014 when he was only 12 years old. Because he was still a minor, a regent and the royal council oversaw the village affairs.

After consultation with family members, agreement was reached that Vho-Tshedza was now old enough to ascend the throne. He takes over from his late father, Musanda Vho-Azwianewi David Mutshinyalo Ravhura, who passed away in 2012.

When handing over the baton to the young man, Thovhele Tshivhase said as a young traditional leader, Vho-Tshedza should follow in the footsteps of his predecessors who had ruled their subjects with love and wisdom. “Starting from your great-grandfathers Vele La Mbeu, Tshisevhe, Malise, Masindi, and Tshinetise, to your late father, Azwianewi - all these people were great traditional leaders whose kingdoms were respected by everyone. We have no doubt that the royal blood in your veins will guide you to steer this ship in the right direction.”

Tshivhase urged the new traditional leader to take education seriously. “I’m happy that we are giving you the power to rule this land while you are still at school. There are dangerous people on this earth who will take advantage of you if you are not educated. Nobody will take away your land because you will be able to read even the smallest print on an official document. When you are educated, you can wisely use your knowledge to bring development to your village. We wish you well in your new role as a leader of the people of this village.”

Tshivhase ordered that all the stamps that were being used in the village prior to the big day be abolished. “I’m handing over a new official stamp to Vho-Tshedza that will be used in all official correspondence of the village. Anyone who is found using an old stamp will be subjected to the strongest legal disciplinary action. I will inform the municipality, banks, all departments and various stakeholders not to accept any stamp besides this one that I’m handing over now.” He said this to the applause of jubilant villagers.

When accepting his responsibility, Musanda Vho-Tshedza said he would not disappoint his family and subjects in his official duties.  “As Vhavenda, we have the saying that shango la shaya thovhele ndi mulano (everybody does as he pleases in the area where there is no traditional leader). This is now coming to an end as I will be leading my village into a transformed area where everybody would like to stay and invest. I will work closely with other traditional leaders, the royal family, community stakeholders, my royal council, the municipality, government departments and all other structures to bring development in my village while, at the same time, giving myself enough time to do my school work.”