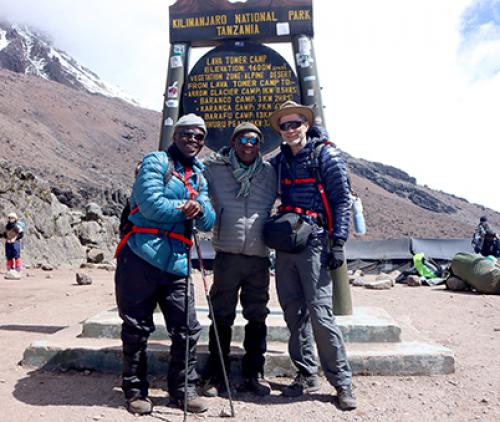 Thohoyandou-based dentist Rovha Kharivhe entered the new decade on an exceptionally high note. He scaled Africa’s highest mountain, Mt Kilimanjaro, and for a short while he probably stood tall as the highest dentist in the world, at an altitude of 5 895 metres above sea level.

Rovha formed part of a team of 11 South Africans who set off on 27 December from Moshi town in Tanzania to scale Africa’s highest mountain. The plan was to start scaling the summit on 31 December and view the dawn of a new year and decade the following morning from Uhuru, Mt Kilimanjaro’s highest peak.

The team of climbers included Anton van Zyl, publisher of the Limpopo Mirror, and his friend from Vosloorus, Zaid Khumalo. Zaid is the co-owner of the Kathorus Mail, a newspaper distributed in Gauteng’s East Rand.

The team started off at Machame gate, at 1 800 metres above sea level. At that point, the weather is warm and humid as can be expected from a country situated on the equator. The first day’s walking stretches through the stunningly beautiful rain forest. The forest lived up to expectations and within a few kilometres the climbers had to get out their raincoats as the rain started to belt down.

The group opted for the seven-day Machame route, which allows time for the climbers to acclimatize and become used to the altitude. One of the greatest dangers of such a mountain is altitude sickness. Above 3 500 metres the air starts to get “thin”, making it difficult for the lungs to collect enough oxygen.

The first overnight stop was at Machame camp, at 2 835 metres above sea level. Fortunately, the group did not have to carry all their own luggage. Mt Kilimanjaro has turned into a major employer for Tanzania, generating thousands of jobs for the local people. Each group of climbers is accompanied by guides, porters, chefs and even a “porta potty” is carried along to assist when nature calls.

The second day of climbing was shorter but much steeper. The lush forest changed into rocky bush terrain, and when the group reached Shira Cave camp, the elevation was already at 3 750 metres. The jackets started coming out as the wind brought in icy weather from the mountain.

Day three saw the group walking all the way up to Lava Tower camp, situated at 4 600 metres above sea level. The strategy is to “walk high and sleep low”, to help climbers acclimatize. Mt Kilimanjaro’s three peaks were formed after volcanic eruptions millions of years ago. One volcanic cone, Shira, is now extinct and eroded, while the other two, Mawenzi and Kibo, “melted” together after subsequent eruptions. The climbers had the opportunity to cross this vast terrain that almost resembles a moon landscape. After spending some time at Lava Tower, the group went down to sleep at Barranco Camp, still high at 3 985 metres.

Day four saw the climbers tackling the arduous Barranco Wall. The route seems to go almost straight up the cliffs and one section of the path is so narrow that only one climber at a time can shuffle past the rock face. This section is aptly called the “kissing rock” as climbers literally hug the rock to ensure that they do not tumble down hundreds of metres.

After spending some time at the high altitude, the group “dropped” down to Karanga camp at an altitude of 4 041. Considering that the Soutpansberg mountain range is just over 1 700 metres above sea level (at its highest point), this is still a considerable height.

The dreaded day five started early on 31 December with a hike to Barafu Camp, which is situated at 4 681 metres above sea level. The distance between the camps is less than nine kilometres, but the team still took about five hours to reach what is also called “base camp”. After lunch, the climbers immediately went to sleep in preparation of the summit attempt, which started at just after 23:00.

The big test started that night with groups of climbers, armed with tiny headlights, making their way up the mountain peak. The weather was exceptionally nasty, with temperatures far below zero. To make things worse, a strong wind made life even more uncomfortable. After a couple of hours, some climbers started turning back, realising that the mountain might take much more from them than they were prepared to offer.

For the ones such as Rovha and Anton, who battled on, a surprise waited. With the sun appearing way below on the far horizon, conditions started to improve. At the top the mountain was clad in a white jacket and Kilimanjaro almost appeared to have decided to embrace the adventurers. When they reached Stella Point, the second-highest peak, the mood changed from almost desperate to optimistic. Stella Point is roughly another 400 metres from Uhuru peak, but this journey takes the better part of an hour to complete.

The dawn of the new decade saw dozens of climbers shuffling along the snowy path to the sign that says: “Congratulations, you are now at Uhuru peak, Tanzania, Africa’s highest peak.” For the climbers from Limpopo, this moment was especially emotional. Anton was joined by his two sons, Jaco and Elardus, bringing the total of the “Limpopo boys” to four.

“When I reached the summit, I don’t even think I had the right words to describe the experience. It was awesome, unbelievable, exhilarating with a feeling of contentment. It still feels like a dream even today,” said Rovha.

For Rovha, the most challenging part was the weather. “Coming from Limpopo, I’d never experienced anything below freezing point. To cope under such extreme conditions was very daunting, especially on summit night,” he said.

After summiting, the climbers had to make their way down the mountain, dropping down to Barafu Camp for a quick lunch. The weary group then had to tackle another four-hour walk to Mweka Camp, which meant a drop of close to 3 000 metres. The following morning, they made their way down to Mweka Gate, where the trip ended.

“I have always enjoyed adventure, but this was quite different. It’s tough, it does test one’s faith, physique as well as mental strength,” said Rovha. Rovha had another reason why he wanted to reach Kilimanjaro’s highest peak. “I have a delinquent child who is very intelligent but lacks motivation. All the while going up, I was praying that when he sees the difficulties I went through to get to the top, somehow he'll get fired up again,” he explained.

Rovha had only praise for the guides and assistants in Tanzania, as well as his fellow climbers. “I left home a lone adventurer but ended up with a group of fellow South Africans who I met for the first time at Nairobi’s airport in Kenya. The camaraderie that prevailed within the group helped a lot; there was motivation, love, laughter, tears and fun. The expedition team (guides, cooks, waiters and porters) were fantastic. One can't help but admire their work ethic. If our communities were as motivated as those guys are, South Africa would be an even better place to live in, especially economically,” he said.

Rovha Kharivhe, a dentist from Thohoyandou, at the start of the expedition at Machame gate.

Rovha Kharivhe (front) with the group of South Africans who tackled Mount Kilimanjaro during December.

The group of South Africans with some of the guides, with Kilimanjaro mountain in the background.

Rovha Kharivhe (front left) at Uhuru peak, Kilimanjaro's highest point. Next to him is Gary Murphy. At the back, from left to right, are Ryan Sandwith, Elardus van Zyl, Jaco van Zyl and Anton van Zyl.