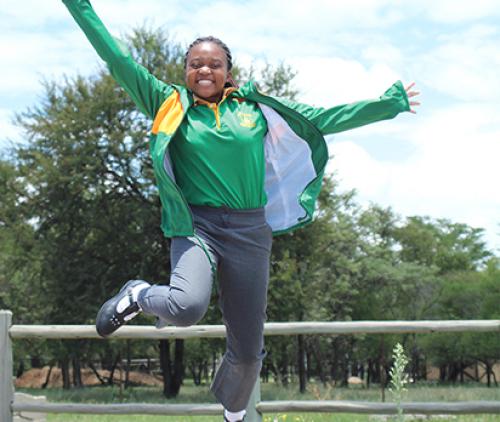 Mutshidzi Ganyane (17) of Patrick Ramaano Secondary School in Nzhelele is the top pupil in Limpopo. This was announced by Education MEC Polly Boshielo during a ceremony at the Ranch Motel outside Polokwane on Wednesday.

Asked about the secret behind her outstanding performance, Ganyane said that time management, discipline and hard work were the most important things that had helped her to achieve good results. She said that her success was due to the grace of God.

She added that, had it not been for the support she had received from her teachers and parents, she would have not made it. “It was not that easy. Success only comes after hard work,” she said. Ganyane encouraged other pupils who had not made it to work very hard and not give up. “Your knock-down is not your knockout," she said. She encouraged other learners to study rather than fool around. “They must just cut the time of going out to parties. Watching TV also does not help, especially watching programmes that are not educational,” said the soft-spoken Ganyane.

Mutshidzi Ganyane plans on studying computer engineering at the University of Pretoria this year. Asked if she had already secured a bursary, Ganyane said that many companies had offered to finance her studies and she was expected to choose one.

During Wednesday’s function, MEC Boshielo said that the province’s pass rate had increased by 3,8%, but she believed that some schools had not performed as well as they should have. “Last year we worked very hard to improve our matric results,” said Boshielo. “We organised massive winter classes and went into partnership with SABC radio and community radio stations to help us with revision for the Grade 12 learners.”

Boshielo expressed her gratitude towards the parents and guardians who had given their children the necessary support and encouragement during this time. “The importance of the role of parents should never be underestimated, as it is critical in sustaining and bolstering the teaching and learning process. The results achieved by the teachers did not happen by accident or luck. It is a result of hard work and dedication. Teachers in this province committed themselves in ways that should be an example to the rest of their profession and we truly appreciate their selfless contribution,” said the MEC.

Boshielo said Mbilwi Secondary School in Sibasa had once again occupied the number one spot as best-performing school.

The Limpopo Premier, Mr Stan Mathabatha, said that the Department of Education had adopted altruism, honesty, compassion, professionalism, fairness, excellence, teamwork and empathy as important values to guide their vision and actions. “We are prepared to unlearn laziness and adopt hard work. We will learn from our past and improve our present reality. Your success and achievement today signify our commitment to advancing the values of education that are central to our liberation as individuals and as a nation,” he added.

Bishop Barnabas Lekganyane of the ZCC congratulates the top Grade 12 pupil in the province, Musthidzi Ganyane. Also in the photo is Premier Stan Mathabatha.

The top pupil in a disabled school, Tiyane Mbendzani of Rivoni School for the Blind is congratulated by Makhado Municipality Mayor, Cllr Samuel Munyai.