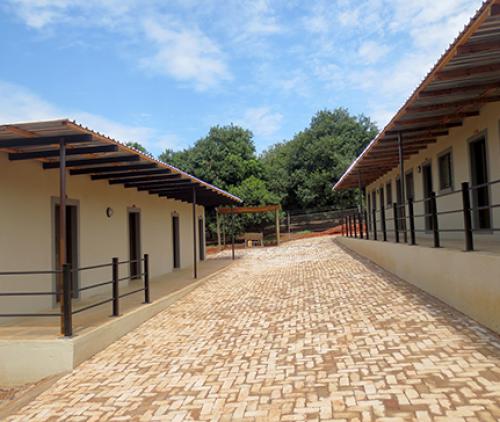 The new houses that were built for the workers.

Houses for workers at Mauluma Enterprize

The working conditions at the Mauluma Farming Enterprise have improved dramatically over the past few years and last week 28 newly built rooms were handed over to farm workers.

The Mauluma farm is situated a couple of kilometres outside Louis Trichardt along the R524 road to Thohoyandou. The new rooms were officially handed over during a function attended by several guests and dignitaries, among others Cllr Dzawele Ratshikuni, who represented the mayor of Makhado Municipality.

According to the farm’s human resources manager, Ms Emily Mashawana, conditions for workers were not always ideal. She said that when they took over the farm in 2006, the workers’ living conditions were appalling.

Currently, 26 of the rooms are occupied and the two others are reserved for seasonal employees who are expected in February next year. The new accommodation has bathrooms for men and women and a communal kitchen.

In her keynote address, Cllr Ratshikuni hailed the new buildings as a good example of the positive spin-offs of a partnership between the government and the private sector. “This kind of initiative points in the right direction in trying to improve the lives of our people on farms,” she said.

Cornelis Erasmus, the director of the Limpopo Department of Agriculture and Rural Development, also praised the initiative. “You have set an example to farmers by building houses for your workers. You have demonstrated that employees are the most important assets of the company. You did not come to the government requesting funding; instead, you used proceeds from your farming activities.”

According to Nelson Netshisahulu, chairperson of the Mauluma board, they had spent R1,5 million on the project and this was only the start of the journey to try and improve the lives of the workers. More houses are expected to be built.

The general manager at the farm, Mr Danie Basson, said that workers would also share in the profits as per the farm’s mandate.

Emily Mashawana hands an incentive to one of the pensioners.