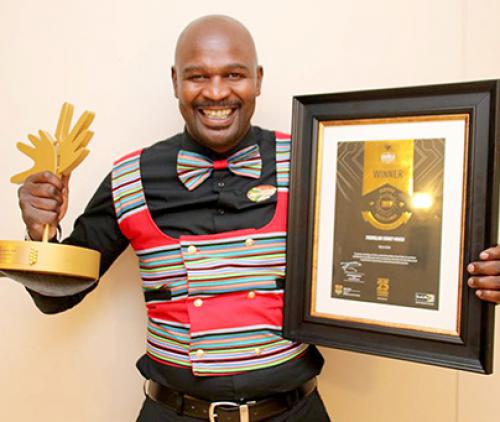 The Minister of Tourism, Mmamoloko Kubayi Ngubane, praised the businesses and individuals that put themselves forward for scrutiny by entering the awards, saying this was a good mechanism to ensure the improvement of standards within the industry. The minister also thanked the men and women who, in their area of work, “go the extra mile to ensure that tourists that travel to our country enjoy a memorable experience. Providing real authentic experiences to tourists is what will sustain and grow our tourism sector,” she said.

Sydney Mikosi is the owner of Sydney’s African Wild Safaris. This energetic nature lover studied to be a field guide at the Limpopo Field Academy. He then enrolled at the University of South Africa to study nature conservation. To top off his academic career, he enrolled at the Southern World College to study as an assessor.

In 2007, Mikosi started working as a field guide at Mabula Game lodge. He stayed there for three years, working as a senior field guide. He was then appointed as head guide at SANParks’ Marakele National Park, where he was employed for more than 10 years.

In 2018, he worked as an international wildlife TV presenter for a multimedia company, Wild Earth, in conjunction with National Geographic. He also worked as a producer for SABC television. During this period, he was also involved in Wild Earth’s Schools Enrichment programme, visiting local schools in Dixie and sharing his knowledge and love of the African bush.

“I am excited and incredibly humbled by this amazing award. To be crowned by the Minister of Tourism as a winner is a great honour. I believe the tourism community has recognised my great love and enthusiasm of the bush and all its wild creatures,” he said.

Mikosi believes that his passionate desire to educate people about the critical importance of nature conservation reflects in this acknowledgement. He is always trying to learn more about nature. “Many tourists affectionately call me the ‘Jungle Encyclopaedia’,” he jokes.

He is very proud to have represented the Limpopo province, including his beautiful home, Thulamela Municipality and the Vhembe District.