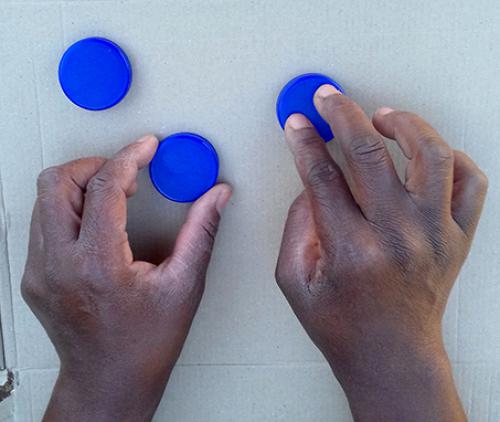 The popular “three-card” game has been played for decades, but lately it seems to be a favourite tool used by local swindlers to con people out of hundreds of rands.

This is a game where the host uses either three playing cards or three bottle caps. In the case of the deck of cards, the host mixes the cards and the player will choose one correct card. With bottle caps, a small stone is placed under one cap before the caps are swirled around, making it difficult for the “player” to keep track of where the stone is.

One of the cons involves placing a bit of chewing gum or any other small sticky matter under one of the caps, which “captures” the stone. The con artists are normally skilled, with a variety of tricks enabling them to remove or switch the stone.

Even if the player were to choose a cap of which they are 100% sure that it contains the stone or paper ball, they would still find nothing inside it, because the con-artist has manoeuvred it and has it stuck either in his nail or on the back part of his palm.

In the 1990s, this game was illegal and many people who hosted it were arrested, prosecuted and given jail terms. Ever since that era, no three-card hosts were seen in any of the towns or cities, luring people into playing.

This dead monster, however, has raised its venomous head right in the busy Thohoyandou streets. Just outside Thavhani Mall, after the traffic signs on the other side, the three-card hosts have occupied the space beside the busy pavement.

“Come one – come all. Win-win now! Good cash for you and your children. Win and go buy food for the family. Win and go buy clothes for the children. This is early Christmas!” hailed a man with bizarre tattoos on his hands. He moved the caps on the board and mixed them with his right hand, while he held about R450 in banknotes with the other hand. He also had a lot of banknotes stashed in his socks. “Any of you with R100, come open the cap – if you get it, you go home with R450!”

A teenager dressed in jeans stepped forward and lifted one cap and a ball rolled out of it. She had won – she was given R450!

On this spot, it appeared that the host team comprised more than 10 members who were mostly masquerading as passers-by who had stopped to observe and eventually became interested in betting.

One old man, who carried a paper bag of some sort, ambled away from the crowd of onlookers, shaking his head incredulously. “The majority of those young women look either stoned or dizzy with hangover,” he muttered. “They are being used for a very dangerous game!”

While players would lure passers-by to chance a bet, this kind of a game is more of a scam or a money-swindling game.

In the CBD, there was another spot. Men and women, some of whom had children strapped to their backs, came closer to observe. After some minutes of seeing others win, they too would join the game, only to suffer great losses.

Limpopo Mirror approached one woman, who had a child strapped on her back, after she had lost. “I feel miserable,” she wept. “My husband will kill me if he gets to know that I have thrown his hard-earned monies to these vultures. He might even kick me out. I had come to buy food for the whole month and some clothes for the kids. Please don't write my name in the newspaper!”

While the host and his team were manning the spot, at least three young men were keeping an eye out for the coming of the police at three different vantage points. One stood right behind the journalist who was photographing the spot from the upper steps of a huge building on the other side, while two stood right in the scorching sun. They were even sharing a two-litre cold drink. Each time they sighted anything suspicious, they would rush to the spot to report to the host, who would then double-check the prospects of danger (the police) and order them to get back to their spots.

Munna Ndi Nnyi's director, Dr Bardwell Mufunwaini, said that he had learnt about the rampant three-card scams in town and that his heart ached for the unknowing townspeople who were the main targets. “The festive season is upon us and many people are going to fall into this trap – it's a trap,” he said. “The police need to act swiftly, and members of public need to be informed widely, so they can stay away from the lure of three-card games.”

A three-card spot can be found in the CBD of Thohoyandou where young men are watching out for the presence of the police.