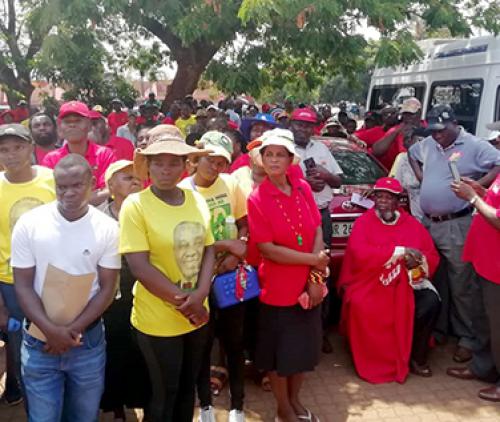 The crowd picketing outside the Thohoyandou Magistrate's Court.

The Thohoyandou Magistrate’s Court was filled to capacity on Monday morning when a suspect appeared in connection with the intimidation of whistle blowers in the VBS Mutual Bank saga.

Members of SAMWU as well as other interested groups picketed outside the court buildings. Many of them are frustrated and upset with the slow progress in the investigations into the deaths of two SAMWU members, Mr Ronald Mani and Mr Tshililo Timpson Musetsho. The two men were shot dead in separate incidents earlier this year. Their killing is believed to be related to the investigations into the VBS Mutual looting scandal.

A suspect, Thabo Sibandze (27), appeared in court again on Monday, but his case is not necessarily linked to the murders of the two people. Sibandze is facing a charge of intimidation and illegal immigration since he allegedly entered the country without proper documentation. He is from Swaziland. He remains in custody and the case was postponed to 25 November for a decision from the director of public prosecutions.

The people picketing outside court were clearly not happy with the slow pace of the investigation into the murders of the two whistle blowers. The secretary of the local SACP branch, Mr Andrew Kotane, said that they would oppose bail. “We have had enough of the endless, brutal and senseless murders within our communities. Our comrades do not deserve to die like rats,” he said.

Kotane said that they had decided to march in support of the families of the deceased. He blamed the Thohoyandou SAPS for dragging their feet in the case and urged the police to constantly update the affected families on the progress in the case.

The crowd picketing outside the Thohoyandou Magistrate's Court.