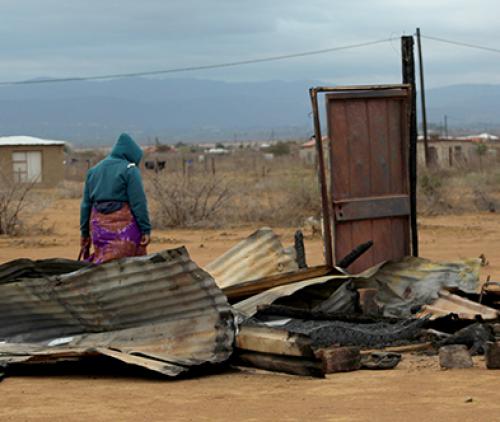 A community member inspects the damage.

Two toddlers from Magau village died a gruesome death on Monday afternoon when the shack they were staying in burnt down. How the fire started is still a mystery, as well as the reasons why the two little girls had been on their own when the fire broke out.

The two sisters, Tshilidzi Mulamu (3) and Tshinakaho Mulaudzi (2), were seemingly trapped in the blazing inferno. Unlike other days, when the children were left with neighbours, they were left on their own that day.

A neighbour, who wanted to remain anonymous, said she had noticed smoke coming from the shack at about 17:30. “I rushed there, only to find that the whole shack was on fire. We tried opening the doors, using spades, and we also broke the windows. We found the two kids lying down, burnt to ashes. They were already dead, and I suspect they had died from smoke inhalation,” she said.

Firefighters and members of the SAPS arrived on the scene shortly thereafter, but it was too late. Nothing could be retrieved from the shack and the damage is estimated to be in the region of R30 000.

A family spokesperson, Mr Stanley Mulaudzi, expressed their shock with the gruesome death of the toddlers. “My heart bleeds with pain and we will never forget this incident. Imagine the pain of losing two children at the same time and the sorrow of your house being destroyed by the cruel flames,” he said. He also thanked the community members for their support during this painful episode.

Mr Tshilidzi Thivheli, the heartbroken father of the firstborn, Tshilidzi Mulamu, said he found it hard to accept that his daughter had died. “I do not believe it. They should have called us to have a look at the ashes and the bones in order to identify her. I won’t believe them, until they come with an answer to this riddle.”

He said he was just praying that the police would do their homework and bring the culprit to book. “Whoever did it does not deserve to be out here, but in jail. Let them hunt him and lock him or her up for good,” he said.

Vhamusanda Vho-Ndwakhulu Sinthumule expressed his shock about the death of the two children. “They died a very painful death,” he said. “We are hurting as a community. This is too much for us. We will comfort the affected family,” he said.

Limpopo police spokesperson Lt-Col Moatshe Ngoepe confirmed the incident and said they were worried about the continuous acts of poor child safety. He said after receiving information about the incident, the police and firefighters reacted quickly, but found the shack already gutted with all its contents and the children had passed away.

“At this stage, the cause of the fire is not known, but our forensic teams will find out as investigations unfold. We are urging parents to put children’s safety first,” said Ngoepe.

The funeral for the two girls will take place at Magau this weekend. The family also appealed to businesses or individuals who feel they can contribute towards the funeral costs to contact them at 076-9316735.