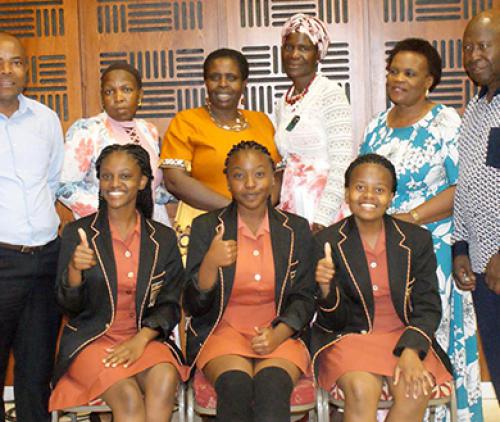 Limpopo province debate ambassadors and their educators during the farewell function held in their honour at the 2Ten Hotel in Sibasa.

Three hardworking learners from Mbilwi Secondary School in Sibasa represented the Limpopo province in a national debate competition the past weekend.

The three, Mavhungu Mavhusha, Makungo Nemanashe and Tshedza Nemavhola, all in Grade 11 and 16 years of age, have beaten all the schools in the province to qualify for the finals to be held in Gauteng.

The public-speaking competition is the brainchild of the Department of Water and Sanitation. For being the top debaters in the province, the three have won themselves full tertiary scholarships.

In recognition of their splendid work, well-known Limpopo businessman Mr Aubrey Mulaudzi organised a big send-off for them. It was held at the 2Ten Hotel in Sibasa where educators and parents were afforded the opportunity to see the learners showcase their talents before the finals.

Mulaudzi, of Aubs Motors and Diesel Centre at Tshisahulu, said he was very impressed by the girls’ achievements and felt it would not be proper if they were not motivated more before heading for the finals.

“Looking at how they performed, we are quite convinced that they will bring the prize back home. They are our good ambassadors and we have no doubt they will do well in the competition. My urge is for parents and other stakeholders to give their full support to the learners,” Mulaudzi said.

Project coordinator Ms Khathutshelo Mavhungu is very confident about the girls’ chances. “We started with preparations as early as April and there is no team that will stop them from snatching the top prize,” she said.

Acting school principal Mr Fhatuwani Rasikhanya praised the learners and encouraged them to work harder as they were no longer representing their school, but the province as a whole.

(The debate competition was held over the weekend, but at the time of going for print, the team were still awaiting the results.)