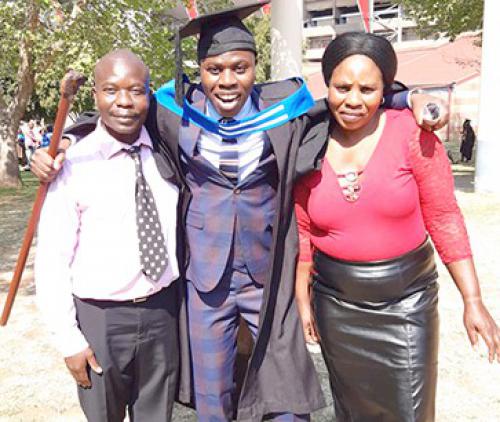 The artist, whose real name is Lutendo Evens Mugagadeli, told this paper that completing his studies was an amazing feeling. “The music industry is very cruel and as young artist you should strive for education. I have already got an offer, and someone is willing to take me to school to study for my degree," he said.

The words of Andrew Carnegie, that "a man may be born in poverty, but he does not have to go through life in poverty" are an inspiration to Vendaboy Poet. "Being born poor is no excuse and it is not something to be ashamed of. Don't let your poor background determine your destiny. Everything is possible in life," he added.

After completing his matric, he did not have money to further his studies and he had to take a four-year gap to raise funds. "I started working as a security officer. I then left the job and pursued my passion, which is poetry. In 2012, I won the first Tshivenda Music Award with a cash prize of R10 000. I used the money to take myself to college since my parents could not afford to do so," he said.

He said that he was happy to celebrate his important day with his parents, who separated more than 20 years ago. "I don't blame them for separating, because I understand that life happens. I am thankful to them for bringing me on to this world and for making me the strong man I am today," he said.

He is planning to release an album with 20 tracks soon. He has also been nominated in this year's South African Traditional Music Awards.