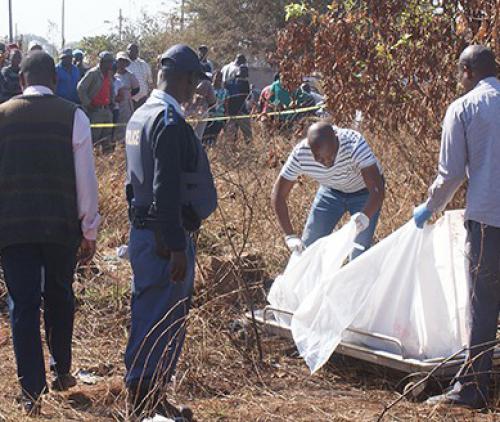 The body of the unknown man is being taken away to a waiting government mortuary van after being found at bushes near the Usave complex at Shayandima.

Angry residents at Shayandima have vowed to take the law into their own hands, following the rampant scourge of violent crimes in the area. The area had been identified as one of the crime hotspots and crime-awareness campaigns were held by the police in the area recently.

The threat came after the discovery of a bloodied body next to a shopping complex near the Usave Supermarket in the area. The body with many stab wounds was discovered by a passer-by on Friday morning.

Not far from the scene where the body was found were pools of blood indicating that the victim could have been stabbed there and his body dumped a few metres away.

The body drew the attention of many locals and many gathered to catch a glimpse of the body. The identity of the victim and how he was killed remain a mystery. Gossip doing the rounds is that the man could be the victim of robbers or could be part of a gang who fought among themselves for loot.

At the scene, two men of foreign origin were taken in by the police for questioning.

As the police were about to drive away with them, residents tried unsuccessfully to block the way, so that the suspects could not go away “before being taught a lesson or two. We are tired of crime in this township and we feel that police are not doing anything to stop this scourge. When they arrest known suspects, you find them roaming the streets the following day. We are tired of this. We want the police to hand over these guys to us,” several residents said.

According to a resident who preferred anonymity, criminals should be beaten before they are arrested.

The chairperson of Munna Ndi Nnyi Men's Forum, Mr Bardwell Mufunwaini, who has led countless marches against crime, blamed the rampant crimes on the easy accessibility to drinking spots where revellers spend the whole night drinking. “There is so much crime here. So many people have been attacked on the streets and some killed in this township. People are not taking care of themselves. What do you expect when you are walking alone drunk in the wee hours of the morning?”

He said that they were also calling on the government to enforce the liquor laws or otherwise “we will still have more of these violent crimes”.

Limpopo police spokesperson Col Moatshe Ngoepe confirmed that a murder case has been opened and that investigations are continuing.

Angry residents wanted the two men who were taken away by the police for questioning to be released, so that they could deal with them in their own way.