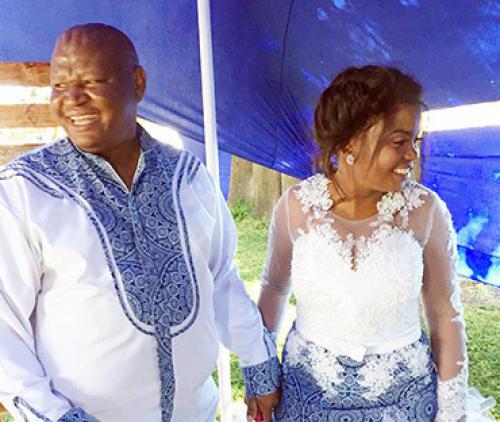 Jordan Shimanyane Maja and his wife, Rifilwe Bridget Nkate-Maja, photographed during their wedding ceremony. They were laid to rest in Musina at the weekend.

Emotional send off for Shimi and Bridget Maja

A dazzling birthday celebration, a glittering wedding ceremony and an emotional funeral, all within the short space of four weeks! This is the sad story of Jordan Shimanyane Shimi Maja and his wife, Rifilwe Bridget Fifi Nkate-Maja, that describes the final few weeks of their lives.

The two vibrant young lives were cut short in a horrific car crash near Pretoria in the early hours of Friday, 2 August, 11 days after their glittering wedding ceremony at Mahikeng on 20 July.

The wedding was preceded by Jordan’s 44th birthday celebration on 12 July 2019.

Hundreds of mourners gathered at the Musina Community hall on Saturday (10 August) to bid farewell to this adorable couple. The sight of two coffins side by side on the stage brought tears to many who came to pay their last respects as speaker after speaker gave their accounts of the life and times of Shimi and Fifi.

Jordan matriculated at Musina High School and then went on to do his BCom Degree at the University of Limpopo (Turfloop). His first job was with Statistics SA in Pretoria. He then moved to Musina Local Municipality as Deputy CFO. He worked for Ventersdorp Municipality in North West, Kungwini Municipality in Bronkhorstspruit in Mpumalanga, and Bela-Bela Municipality as chief financial officer. He also worked at Capricorn District Municipality as manager responsible for expenditure.

At the time of his death, he was the director local government budget analysis at the National Treasury, a position he held since 2011. Maja also played a key role in the establishment of Musina Community Radio.

His wife, Refilwe Bridget Ntake-Maja, was born on 20 October 1988. She completed a Travel and Tourism Diploma at Mankwe College. She was then employed at Clicks Pharmacy in Lenasia from 2016 as pharmacy assistant until she resigned in May this year.

In a Facebook post, Mr Abram Lerule, the deceased’s former municipal manager at Musina, described him as the glue that kept a circle of friends together, a sentiment echoed by the deceased’s brother, Robert, who told mourners that Shimi would always bring the family together. “Shimi would call family members and arrange family gatherings. He would also follow up on those who did not attend, trying to establish the reasons for their absence from these meetings.”

In his address on behalf of friends, Mr Kenny Ramuthibeli described Shimi as a man who had friends across all generations. Family members cried uncontrollably as the two caskets were lowered to their final resting place.