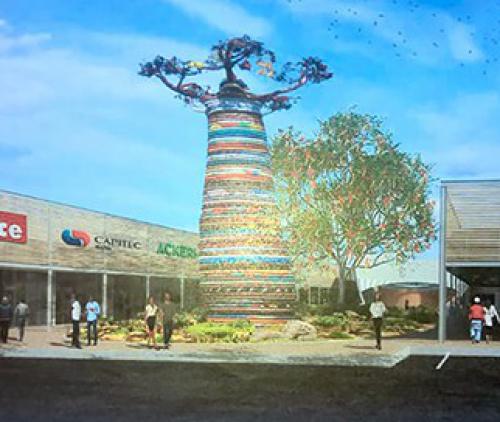 An artist's impression of the front view of the new Mphephu Plaza.

Mphephu Plaza at Siloam to open in April next year

The construction of a new mall, Mphephu Plaza, at Siloam village in Nzhelele is set to create more than 230 jobs for locals.

On Tuesday, different stakeholders such as Thovhele Toni Mphephu-Ramabulana, the Masingita group, Makhado Municipality, the Siloam community trust and the Siloam-Sibasa Taxi Association gathered at the Mphephu Tribal office to discuss the construction of the first phase of the Mphephu Plaza.

Almost a decade has passed since the first rumours surfaced that a mall was coming to Siloam village in Nzhelele.

Mr Timothy Phiri from the Masingita group of companies said that construction of the first phase would begin in the first week of August and the mall would officially open in April next year. "The first phase will be 9 000 square meters and about 250 people will be employed during the construction of the mall. It is estimated that about 145 will be employed permanently, once the mall starts operating," he said.

He also stated that the mall would have shops such as Shoprite and Cash Build as the main tenants, as well as KFC, Steers and Debonairs, OK Furniture and Capitec, Absa, FNB and Nedbank. It will also cater for clothing shops such as Pep, Ackermans and Mr Price, with a total of 63 shops. It will also have a new taxi rank.

Thovhele Nkhaneni Ramovha said that the Malnet group had bought the stand in 2010 and the first development was the Siloam Sasol garage, which was officially opened in 2015. He further stated that what brought joy to his heart was that he could create employment for many rural families. "With the few job opportunities that we create, we are able to feed families. My job is to develop the Venda area like what we did in Manini with the Thavhani Mall. To the people of Nzhelele I am saying: Here are job opportunities, go work."

The chairperson of the Siloam Community Trust, Mr Nthatheni Albert Ramugaeli, said that they could see that the developers of the project had heard the cry of the people of Siloam. “Community development projects like this one are for the people and they must use it accordingly. Local people will no longer have to go far to shop."

Makhado ward councillor Margret Mathalise said that she was very happy about the development, "and unemployment is now a thing of the past here in Ward 33 of Makhado".