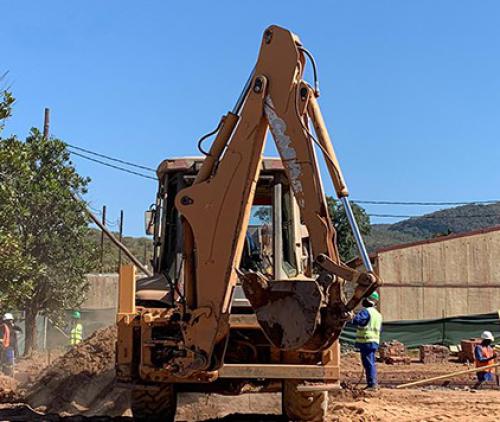 Construction is under way at Limpopo Traffic College.

The community of Vhembe, especially those in the Mutale area, will be excited that the Limpopo Traffic College will not be moved away from Tshilamba to Polokwane.

During our visit to the school premises last week, Limpopo Mirror has witnessed construction work under way at the college’s base, the former Manenu battalion facility.

The construction work, which started in April this year, is part of the six blocks of student residences.  The first block, to the value of R20 million, will accommodate 60 traffic students. The block is expected to be complete at the end of April next year.

The construction of the students’ residence block will end the speculation that has been going around about the imminent shifting of the training centre from Tshilamba to Polokwane as has been happening in the previous year. The fears, which were also published in this newspaper, were also related to the then MEC for Transport, Makoma Makgoropetje by Thovhele Vho-Bvudzitshena Nethengwe.

During a passing-out parade of traffic officials at the centre early this year, Nethengwe appealed to the MEC not to move away the college as was being speculated.

Makgoropetje then assured Nethengwe and the gathering that the facility would not be moved away.  The MEC also said that “R20 million will be spent in the coming financial year to refurbish the buildings that were built by the former Venda government when it was still called Manenu Battalion”.

He emphasised that the first building to be refurbished would be students’ residences.  Another R10 million will be spent on the purchasing of high-powered vehicles that will be used exclusively by traffic officers.

The building of students’ residences is expected to be take five more years, and will eventually accommodate 360 people, male and female.

According to the plan, the new building will include parking, a kitchen, an admin block, a student education centre, an auditorium and a gymnasium.  Some of the old buildings will be destroyed while some will remain.

The current accommodation can accommodate 250 students.

The multi-storey building is expected to be the first of its kind in the Mutale area.  Many of the local people will be excited about this project, which will add value to the already developing area with some of the modern houses built on stands situated next to Thengwe Secondary School.

A new shopping centre next to the training centre and a branch of the Vhembe FET College at the building of the old Thengwe Secondary School will also be erected.