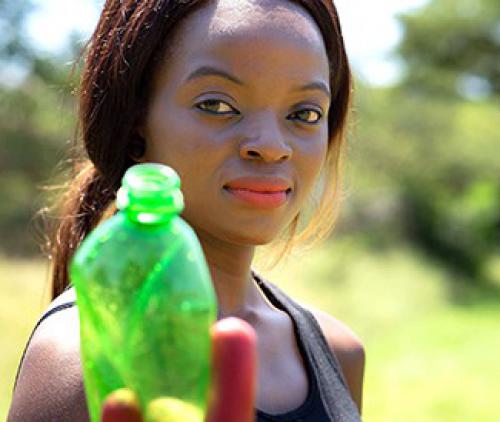 From model to award-winning trash recycler

The 25-year-old Rotondwa Musitha from Louis Trichardt has won a few titles in her life, but she keeps on surprising. In 2014, she was crowned Miss Commonwealth Popularity and represented the country in London. A year later, she was Miss Heritage SA, and in 2016 she shared the Miss Mamelodi Sundowns Limpopo title. The latest accolade for this dynamic lady is something completely different – she won a national award for her efforts to recycle waste.

Rotondwa is well known in the region, having matriculated at Louis Trichardt High School. Not many people, however, know that she has turned into a successful and well-respected businesswoman, focusing on the recycling of waste. Earlier this week, PETCO (PET Recycling SA), announced that Rotondwa is one of the winners of the national Waste Reduction Youth Warrior award.

Rotondwa said that the idea to look at recycling actually started while she was still studying. In order to finish her degree, she had to complete a module on social responsibility and environmental management. “I started to do my own research on recyclable material within the province and realised that less than 2% of all recyclable material in the Limpopo province gets recycled. This meant that there was a gap for waste buy-back centres and an opportunity to offer environmental awareness solutions,” she said.Rotondwa feels no “shame” in collecting what other people throw away. She quickly realised that beauty alone would not unlock all opportunities in life. After finishing school, she studied business economics and obtained a BA degree in business administration. Back at home, she believed that money could be made out of recycling and she formed her own company, Trash Converters.

Rotondwa had no capital, just the savings accrued when she still worked and earned an income as a model. She invested this in her business and started working, literally picking up litter. Working on foot, she and her small team collect approximately eight to 11 tonnes of waste per month. “This is my job, this is my pride, picking up rubbish and making a living from it,” she said.

For Rotondwa, waste collection is a lot more than simply earning an income and being independent. “Slowly but surely, people in my community are seeing the importance of recycling and the environment. That makes everything worthwhile,” she said.

Rotondwa encourages other people to follow in her footsteps. “Before doing anything, it is important to do research on the material you want to recycle, whom you can sell to and at what cost, not forgetting the area you want to operate in to see if it will be feasible,” she advised.

“Ensure that you get all the certification required for you to operate but, most importantly, to start collecting. Even if you are starting small or at home, it is important that you start and hit the ground running.  Close your ears to the noise about how it is a dirty job and how you can get an actual job. Just have the drive and you will be fine,” she said.

As a young person, she also has a message for the youth of South Africa: “Have dreams and don’t let anyone tell you it cannot be done. It can – they may have failed, but you won’t.”

Rotondwa’s efforts were recognised by the PET Recycling Company (PETCO) when she was announced as the Limpopo winner of the Waste Reduction Youth Warrior award. PETCO supports recyclers such as Rotondwa with community programmes, educational material and awareness programmes on recycling. (PET is the acronym for a very versatile plastic called Polyethylene Terephthalate, the plastic used to make the most common container in the soft-drink market today: the plastic bottle.)

Rotondwa was very impressed with the award. “This award means a lot to us, especially getting recognition from a body such as PETCO that is invested in the work we do and our future growth. It motivates us as a team to continue on the path we are on, as it goes to show that we are on the right track and we are being recognised for the difference we are making in diverting waste from the landfill,” she said.

(To watch the interview with Rotondwa, visit this link.