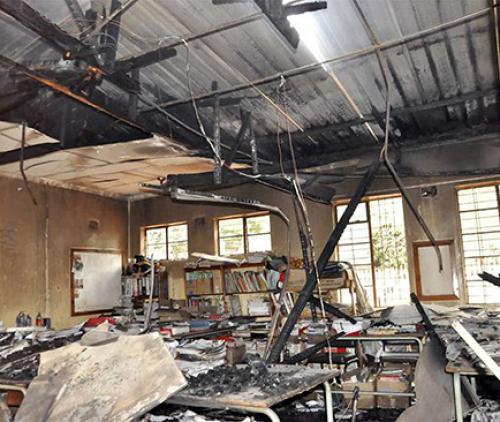 Residents of Shayandima outside Thohoyandou had a rude awakening last Wednesday when they found the whole administration block at one of the local secondary schools gutted by fire, most probably as the result of a break-in by vandals or criminals who wanted to steal the school’s property.

Terrified residents staying next to Shayandima Secondary School said they heard something that sounded like gunshots at around 04:30 and could not go out, fearing for their lives. A man working as a security guard at the school said he was doing his routine patrols when he noticed that the electricity supply kept going on and off.

"I was doing my patrol around 04:00 in the school yard, and all of a sudden the electricity supply started to become irregular. Upon further investigation I found the admin block on fire. I ran and sought help and together we summoned firefighters and police," he said.

SGB member Mr Stanley Makhado, who was also at the scene, said the incident had left them in a state of shock. "We are worried that this will affect the education of our children. We held a meeting with the local Sanco, and we are looking at ways to rebuild the block and what to do to stop this criminality. We are just happy that most of the school records were not destroyed by the fire,” he said.

How the alleged criminals gained entry to the school yard is still subject to police investigations. The fence at the back of the classes, however, was found broken and a padlock was also broken.

According to several residents of the area, Shayandima is one of the areas that has been identified as a crime hotspot and was being overwhelmed by people using drugs.

Shayandima community leader and Munna Ndi Nnyi Men's Forum chairperson Bardwell Mufunwaini, who was at the scene, said residents were in shock. "This is quite disturbing. We of course know that crime is higher in our area, but we do not expect any sober-minded person to attack a school. This is the future of our country and we cannot just watch as the future of our children is being stolen by thieves. We hope the police will make an early arrest and the perpetrators be brought to book," he said.

A spokesperson for the school told Limpopo Mirror that they had had a meeting where they had discussed the issue of rebuilding the block. Due to structural damage, the building is no longer suitable for use. Books and some equipment were damaged, but at this stage they cannot supply an estimation of the damage

Limpopo police spokesperson Col Moatshe Ngoepe confirmed the incident. "We are investigating a malicious-damage-to-property case. So far, there has been no arrest and investigations are continuing," he said.

Community leader Bardwel Mufunwaini tries to extinguish the fire that destroyed at the admin block at Shayandima Secondary School.

The broken padlock at one of the entrances at Shayandima Secondary School.

Community members assess the damage after the administration block was allegedly set alight by unknown assailants.