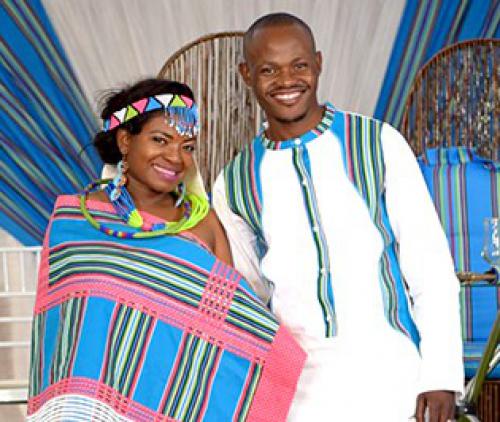 Emmanuel Letsie and Lutendo Ramadwa were overjoyed during their marriage ceremony at the AFM Thohoyandou Assembly.

Fairytale romance for Princess Lutendo and her Lesotho prince

“We are keen to share our love story, because every matrimonial tale is soothing to the ears of many who hear or read about it.”

Those were the words of an acclaimed poetess and singer, known to many as Princess Lutendo, who wedded the love of her heart a fortnight ago.

Lutendo Ramadwa met her future husband at church. She knew nothing about Emmanuel Letsie at that stage except the fact that they were active members in the same church.

On that day Emmanuel, a Lesotho prince from the Letsie Royal Family, was preaching while Lutendo was singing. Emmanuel was smitten on the spot and he can recall it all: “The moment I saw this woman I knew that she was the bone of my bones, my missing ribs.”

And Lutendo, the second-born daughter of the politician Mme Merriam Ramadwa, could actually remember how she connected to him, for the connection was real and tangible.

“Ndo mbo di farwa nga June na July (I trembled),” she said. “I felt a deep connection that finally my missing puzzle is here to complete me. I remember when he proposed he went straight to the point and said: 'Be my wife'. And I asked him if he didn't want us to embark on a process of getting to know each other first and his answer was that if God had approved our communion already no man could stand against it, including us.”

The fact that they came from two different cultural backgrounds, with Lutendo coming from Thohoyandou and Emmanuel from Lesotho, did not impact negatively on their newly formed relationship. Emmanuel is the first-born son of Chief Makalo Joseph Letsie and Queen Makori Letsie of the Hloahloeng region.

“We are living in a diverse world already, where cultural diversity is no longer an issue to many of us,” she said. “Though diversity sometimes brings cultural clashes, through it we were able to learn what love is all about; that love is stronger than cultural differences. Indeed, nothing can conquer the force called Love. It makes all things possible.”

She admitted that her husband's culture was different to hers and that they both had to adapt.

“Of course, like with all royal households, the Letsie have particular manners on how one should hold or behave themselves as a way of serving and representing the royal family in a dignified way, and that has not been a difficult thing for me to do since there is royal blood in my family,” Lutendo said. “In essence, good morals are always good everywhere in the world.”

In the couple's world, marriage is an intimate union between a man and a woman in which the two become a unit, complementing each other physically and in all other areas of life.

“Its purpose is to reflect the relationship of the Godhead and to serve Him,” said Emmanuel. “Marriage is also dependent on a fundamental principle of submission and love; it's like a plane operated by a pilot and a co-pilot. They both have the same qualification and every button on the pilot’s side is there on the co-pilot side, but the successful departure and landing of the plane depends on their embracing oneness and the complementing of each other.”

The couple have this to say to youths out there: “Cohabiting is like driving without a licence. You can drive and enjoy the benefits of drivers, but you are not authorised. Therefore, marriage is good. You are able to enjoy the blessings that come with it. Plus, you are authorised to drive without any traffic cop slapping you with a traffic ticket for having contravened the road law.”