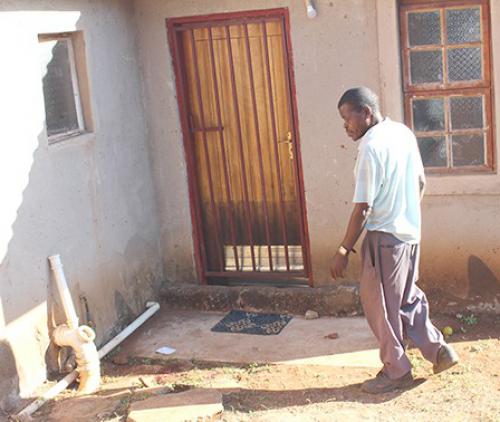 The outside room the murdered woman rented at Mvudi Park. The man in the picture is one of the shocked residents in the area. Residents say crime is at an all-time high in the area.

The brutal killing of a young woman and the stabbing of two others sent shock waves through the community at Muledane Mvudi Park.

The three women were asleep in their rented rooms when they were allegedly surprised by two armed men wielding a gun and knives. The three were stabbed and robbed of their possessions before the suspects fled the scene.

One woman, only identified as the 23-year-old Ms RG Mokoena, died at the scene, while the other two were hospitalized in a very serious condition. At this stage, the circumstances surrounding the incident are extremely sketchy, but the incident happened on Monday morning at around 04:00.

Residents said violent crimes and other crimes were fast becoming a major headache in their area. Not a week passes without a shocking incident being reported in the area. This is not an isolated incident where violence was used during attacks. Elsewhere in Thohoyandou incidents are being reported regularly.

Three weeks ago, a local pastor's wife was attacked and killed by intruders in Thohoyandou Block G in what is believed to have been a robbery.

According to information at our disposal, the victims in the latest incident are believed to be from outside Thohoyandou and had rented the outside house while setting up a business at the Thavhani Mall.

Residents have cited many reasons for the upsurge in crime in the area. Some say the busy passage from Thohoyandou used by passers-by could be the main factor attracting criminals to their area. They have tried unsuccessfully to block the busy shortcut by using big rocks, but this has only stopped cars from passing through their area.

Some are blaming the dense bushes around their area, saying they had become hiding areas for the criminals who stole and hid themselves and their loot there. Another theory is that most of the criminals who have been chased from neighbouring villages have regrouped and are staying at rented rooms in the area.

A local community leader, who preferred anonymity for fear of reprisals, said crime was at an all-time high in the area and that residents were no longer living in peace. "Criminals are reigning here. They are making our lives very miserable, and we are left helpless. On one bad day we woke up to the fact that at least five homes had been broken into. We asked our municipality to partner with us in constructing a wall that will stop criminals from doing as they please.”

Meanwhile, the police have confirmed the incident. Limpopo police spokesperson Col Moatshe Ngoepe said they had launched a manhunt for the killers. "Anyone with information that can lead to the apprehension of the suspects should contact Captain Sithata at 082 414 7763 or the Crime Stop number 0860 010 111 or the Crime Line SMS 32211 or the nearest police station," he said.

Blood spattered next to the door where the murdered woman stayed.