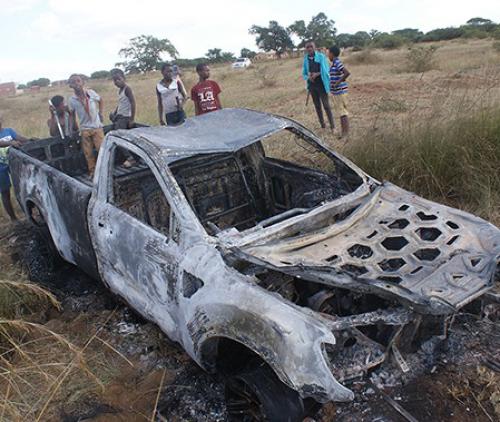 The bakkie alleged to have been used in attacks at Dzwerani was burnt to ashes by angry residents.

Angry community members at Dzwerani outside Vuwani, an area that is fast becoming a fertile hunting ground for criminals, have vowed to clean up all crimes in their area.

Crime in the area that used to be a very peaceful one has become so prevalent that residents cannot sleep in peace as criminals wreak havoc in the area. Residents say they have had no peace as they are being robbed, attacked, raped and have their houses broken into by criminals.

The criminals are alleged to be torturing residents after breaking into their houses and using hot irons to force them into handing over their valuables. They then load whatever they can onto a bakkie before speeding away.

One bakkie has been identified at most of the crime scenes, and soon thereafter the community started hunting for the driver. On Sunday, the alleged getaway bakkie was spotted by observant members of the community.

The man, who is from nearby Lwamondo Lukau village, was rounded up and attacked with an assortment of weapons by angry residents. His new bakkie was burnt to ashes by them.

The alleged thief was taken away by community members to point out accomplices.

An angry community member, who preferred anonymity, said they were tired of the crime taking place in their area. "We are sick and tired of these hooligans. You report them to police, and they do nothing about it. We have decided to take the law into our own hands, and we will wipe out crime here.” He added that what they were doing would deter others from trying their luck in that area “and they will not set foot here".

The resident said the man alleged to be a notorious criminal was a former security company worker who knew most of the places where he could steal. "Just imagine a man from Lwamondo whose mother bought him a bakkie to work with, but he is using it for crime.’

Another member of the community said that they had started defence units in the community where they went out every evening for patrols. He said they were having sleepless nights to ensure that their community was safe.