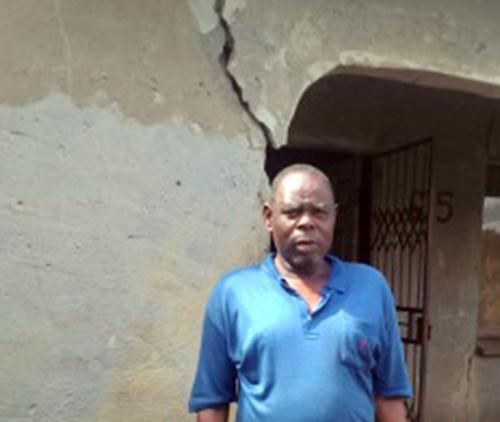 The disabled Mr Ntsengiseni Mudau stands in front of his cracked house that can collapse at any time.

A 61-year-old man from Malonga outside Vuwani spent a year in jail after a murder charge was allegedly fabricated against him, but he was later acquitted of the crime. He said his life was falling apart and he urgently needed help.

Towards the end of 2009, Mr Ntsengiseni Elias Mudau was arrested for murders that took place at the nearby Nkuri village, not far from Giyani. Mudau spent the whole year in jail until he was acquitted in the Giyani Magistrate’s Court.

That was not the end of his woes as the angry local community could not understand how he had been freed. They later burnt down his home with all its contents and his car.

He later relocated to Maniini, where he presently resides.

The disabled Mudau, who uses an artificial leg, said that since his release from jail, he had encountered one misfortune after another, and life had been difficult for him.

"First it was a year in jail after a jealous neighbour incited the community against me. I also employed the services of a lawyer in a bid to hold police accountable for unlawfully jailing me for something I did not do. The lawyer failed me dismally and told me he could not proceed with the case as he was afraid of the community.”

He added that it had been a full decade of misery for him and no one was prepared to help him. “My life is upside down and the sooner I get help, the better, or I will die of stress," he said.

Mudau further indicated that he had spent a lot of money on legal fees but found no justice in the end.

He said he had received money from the Road Accident Fund, which had made his neighbours jealous, but that “had dried up”.

"The house I am staying in is dilapidated and falling apart. I am helpless and penniless as I speak now and will accept any help. I desperately need help to sue the police for incarcerating me for a year on fabricated charges.”

He pleaded with any lawyer who can assist to “please help me regain my dignity."