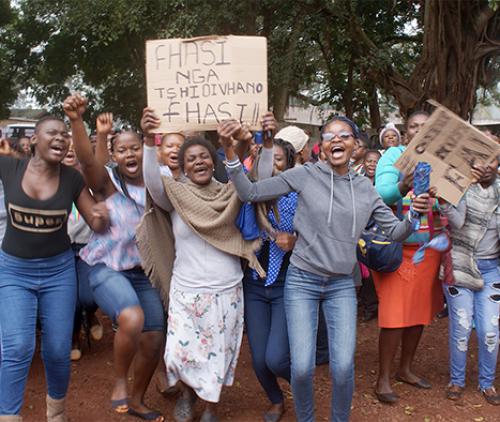 Angry residents chanted slogans at the local satellite police station from where they marched to different projects in the village.

Corruption has become the talk of South Africa and is heard in the corridors of power and corporate offices.

People might think thatthis kind of thing does not happen in simple rural communities. The fact is that the demon is raising its ugly head in rural setting such as Phiphidi outside Thohoyandou.

Unlike in government, where commissions are being set up to unearth the roots of corruption, residents from six villages at Phiphidi  who are tired of corrupt activities happening in their village have organised themselves and have started an anti-corruption unit that will look after the interests of the residents that are being eroded by corruption.

On Wednesday, thousands of residents from the different villages, led by the anti-corruption committee, gathered at the local satellite police station from where they marched to the different projects and handed over their memoranda of grievances.

They say people employed at the different projects were employed in a corrupt way that deviated from their set systems. They blame the junior traditional leadership for practising nepotism in the area.

Phiphidi Anti-Corruption Unit spokesperson Mr Azwitamisi Thovhogi said the community was tired of corrupt activities taking place day in and day out. "So many things are not going right in this village, and if we do not stand up as a community and correct the wrongs, no one will do it for us. We have a big challenge of greedy traditional leaders who are into corruption that has denied chances of making a livelihood to many of our residents."

He added that they had many projects underway in different villages that were  supposed to have absorbed a lot of the unemployed in the villages, “but these have benefitted those connected to the traditional leaders”.

He added that these accused had employed close relatives and friends and were not following the set standards of the community. “What we want is that the projects stop for now while they correct the wrongs. We will not allow a situation where the poorest of the poor are being denied a chance to earn a livelihood because of corruption. We will stand up as a community and fight for our rights," said Thovhogi.

He further indicated that they would fight for the disbandment of the projects' steering committees and other structures that he said were not representative of the community. "We will not rest until all goes well in this area."

According to him, their senior traditional leader, Denga Tshivhase, is a noble man "but his junior chiefs are ruling residents with an iron fist".

The Phiphidi Anti Corruption Unit's executive members, who led the marchers to the different projects in the area.