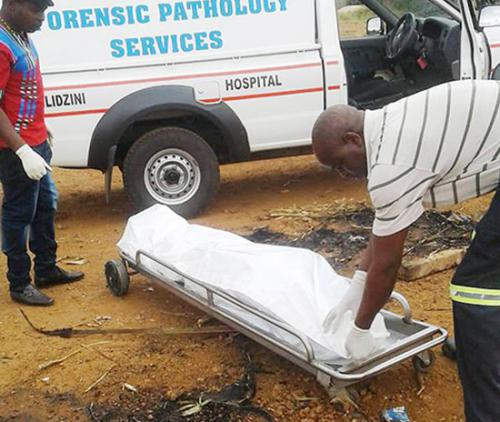 A member of the forensic unit of the police covers the remains of an alleged housebreaker who was burned alive by angry community members in Itsani-Matieni village on Sunday.

A Zimbabwean national, known as “Thinashi”, was burned to ashes after the community members took the law into their hands during an incident at Itsani-Matieni village just outside Thohoyandou on Sunday morning.

Two Zimbabweans were allegedly found stealing. The other man, known as “Blessing,” was rescued by the police and will appear in court soon.

The chairperson of the civic organization of Itsani-Matieni village, Mr Michael Gumula, said crime was very high in villages such as Itsani, Tshisahulu and Manamani.

Gumula said that they loved the Zimbabwean nationals staying in Vhembe as their citizens and two weeks ago they were trying to register them and put on the database of the civic association.

He said the communities in his village had just launched street committees as another way of fighting crime, “but Zimbabweans are not willing to help us fight crime; instead, they continue terrorizing the communities”.

The police spokesperson in Thohoyandou, Sgt Vuledzani Dathi, said they had opened two cases - one for housebreaking and another for murder after the two Zimbabwean nationals were attacked by angry community members, who accused them of theft.

Dathi warned communities not to take law into their own hands but to hand criminals to the police, so that they can be tried in a court of law.