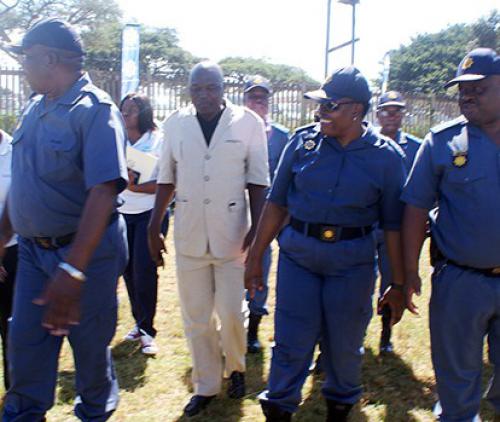 The provincial commissioner is ushered in at Fulufhelo Sports Grounds by the local leadership of the police and the traditional leadership.

Please furnish us with information - Ledwaba

Residents of Vhembe were urged to supply whatever information they could to assist the police in solving several murders that happened in the area recently.

This was the message from Limpopo police commissioner Gen Nneke Ledwaba during a police imbizo held at the Fulufhelo Sports ground in Thohoyandou.

The event took place on Friday and was attended by many traditional leaders under the Mphaphuli jurisdiction, as well as station commissioners, different departments, many community members, the community policing forum, pastors and other interested parties.

The Vhembe region has experienced an upsurge in violent crimes in recent times. These include the murders of two well-known Samwu leaders and taxi owners, who were gunned down execution style by faceless killers.

During the visit, the commissioner formally posted monetary rewards to the value of nearly a million rand for information that could lead to the arrest of those responsible for the murders.

In January this year, the region was shocked to hear of the death of two prominent Vhembe unionists, Mr Ronnie Mamie and Timmy Musetsho. The two were very vocal on the VBS looting and called for those involved to be fired from their positions.

There were also other murders of prominent taxi operators, who were shot dead at Nzhelele, Thohoyandou Block F and Maniini. In all these cases, no one has been arrested and this has led to an outcry from the disillusioned community, who say the police are not doing enough to catch the suspects.

Ledwaba made a call to the community not to keep quiet about the vital information that could help the police crack cases that have become elusive and kept the police on their toes. "We are worried about the unresolved murder cases that happened in this area. We know there are people who know something about these killings. Please give us the information and rest assured your information and identity will be treated in the strictest confidence. On top of that we are offering rewards to anybody who might come up with information that would help us crack the cases," Ledwaba said.

The local traditional leader, Chief Makwarela Makhuvha Mphaphuli, thanked the commissioner for having decided to visit them. "Crime is high in this area. We are here as traditional leaders because we are concerned about what is happening here.”

Anyone with information that can help the police to arrest the suspects involved in this murder, may contact Brig James Espach at 082 576 0744 or the Crime Stop number 0860 010 111 or the Crime Line SMS 32211. The information received, will always be handled with confidentiality.

A malende group entertained guests during the event.