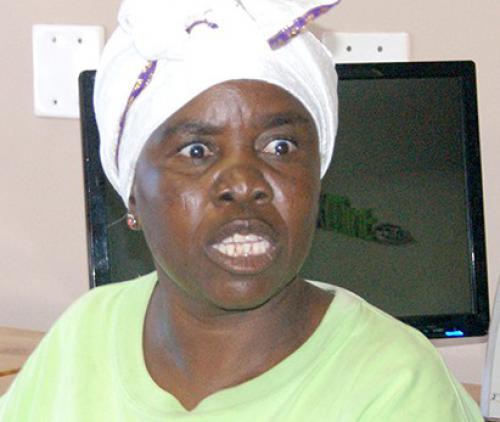 Ms Suzan Ngobeni insists the committee and mall management are treating her unfairly.

Vendor vows to fight for her spot at Elim Mall

A vendor at the Elim Mall is embroiled in a battle with the centre management and the committee members regulating vendors who are selling in the area.

Ms Suzan Ngobeni (56) has been selling her fruits and vegetables in the same area since 1983. The mother of four claims that when the mall started operating in 2013, she formed part of a group of vendors allocated a space to continue her business.

This apparently changed when she clashed with a committee member whom Ngobeni claims is driving a personal agenda.

She alleges that the man proposed to her, but she refused his attentions. This allegedly prompted him to be bitter and subsequently mistreat her. “He promised to make my life a living hell until I do what he wants,” she says.

Ngobeni then found out that her spot had been allocated to another vendor. In an effort to save her business and continue selling in the area, Ms Ngobeni approached the centre management to remedy the problem.

She claims that the man continued to harass her, but the centre management did not solve the problem. Whenever she brought her produce to the stall, the man and some other committee members confiscated her stock and verbal fights usually ensued.

According to Ngobeni, she was ordered to pay a R200 monthly fee if she wants to continue selling in the area. “I found out I was the only one asked to pay that amount and I didn’t pay,” she said.

The centre management vehemently dismissed all these allegations and insisted that Ms Ngobeni was deliberately lying. The centre’s manager, Mr Owen Maphanga, confirmed that Ms Ngobeni had been selling in the area before the new owners took over.

“When our company bought the land from the Tlakula family, they decided to build small markets at the taxi rank which will accommodate those vendors, depending on the availability of space,” he said. According to him, the vendors had their own committee and kept their own books of people paying the monthly rent.

When a new system was introduced, due to limited space, the previous committee agreed that vendors who were paying their rent on time and ensured their books were in order would be prioritised. It was agreed that those whose books were not in order would only be accommodated later. “She disappeared for a year, came back later and started dictating,” he said.

He said she had held a meeting with him, where he advised that she should follow procedure. Much to his surprise, she called him last month, informing him that she had already packed her stock and she was selling. He told her that she must follow the rules like any other vendor.

“For now, we don’t have available tables. She needs to wait,” he said.

Mr Maphanga said that the committee had approached the court to obtain a protection order against Ms Ngobeni and not the other way around. “She is no longer allowed anywhere near the mall and with her behaviour, she is violating the instruction of the protection order,” he said.

Maphanga initially promised to provide a copy of the protection order, but on Monday he said that the committee could not find a copy.

Mr Oupa Tlakula, who used to monitor vendors before the new owners took over, confirmed that Ms Ngobeni was registered and paying her rent on time.

“For now, I don’t handle the books anymore. I used to do that before the mall was built and became fully functional,” he said.