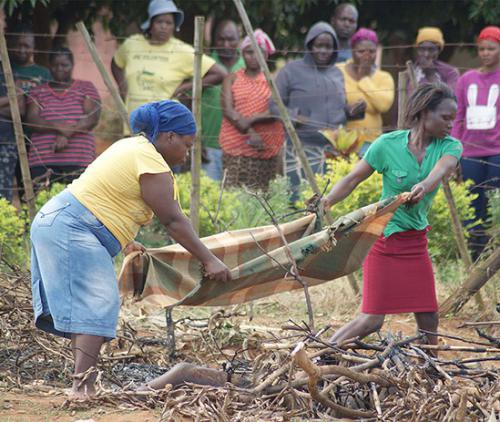 Relatives of the deceased man cover his lifeless and burnt body at Tshisahulu.

The life of an alleged thief and known drug addict, who had allegedly stolen a plasma TV from his family at Tshisahulu Riverside, came to a deadly end when an angry mob chased him, caught him and beat him before setting him alight.

The incident happened at the troubled and crime-infested village on Tuesday morning.

The man, a known nyaope addict, was identified as Calvin Fulufhelo Ramala (29). He arrived home on Wednesday from Gauteng and was caught red-handed in possession of a big screen TV by observant members of the community. When asked where he was taking the screen, he could not give direct answers.

Fearing the worst, he started running away, but angry community members caught up with him and meted out instant bush justice. He died at the scene before the police arrived.

He apparently gained entry to his sister’s house by breaking a security gate at the house. He was killed at the gate of his sister's house and tyres and petrol were used to burn him alive.

In this recent incident, the dead man's nephew - Mr Mashudu Mudau, who stays at the house that was broken into - said he left for work at Muledane in the morning around 06:00. "I received a call just past 9:00 that our house had been burgled and that my uncle was the suspect.

"I rushed back home, and everything was in a mess. My uncle was lying there, dying a painful death at the gate. The house was also in a mess, with things turned upside down after the security door was broken. It is a very saddening situation. We lost an uncle, who stole from his sister's house, and incurred a loss as we have to replace the burglar gate he broke," he said.

A relative of the deceased, who did not want to be named, said the man arrived from Gauteng last Wednesday. "He was very addicted to drugs and we had no peace when he was around as he would steal whatever he came across in the home. On Thursday, he took pots and a spade from home and wanted to sell them but was stopped from doing so by a family member, who followed him.”

The senior traditional leader at Tshisahulu, Thovhele Thivhulawi Makumbane, said he was also worried about the spiralling crime in his area. "Crime is at an all-time high in this area. Day in and day out we are overwhelmed by reports of violent crimes in the village, but we are urging our people to be calm and not take the law into their own hands and rather work with the police to bring the suspects to book, so that they could account for their crimes," he said.

Tshisahulu Sanco secretary Mr Tshilidzi Nethonzhe said crime had become a worrying and burning issue in the village. "People are tired of crime in this area. Since the beginning of this year, there has been more than a hundred incidents of crime here. As leaders and community, we are trying our best to beat the scourge of crime.”

He added that they had started with night patrols, “but soon we will have a community meeting where we will discuss how we should go forward in the fight against crime. Street defence units are some of the solutions we are going to look into," he said.

Thohoyandou police spokesperson Sgt Vuledzani Dathi confirmed the incident and warned communities not to take the law into their own hands, but to hand over criminals to the police so that they can be tried in a court of law. "We have opened a murder case and are appealing to community members who might have information that can assist us to arrest the culprits to come forward, or to phone the Thohoyandou SAPS at 015 960 1000, or 0860 010 111," Dathi said.

* This incident of mob justice in Vhembe is not an isolated one.

Two weeks ago, angry and fed-up residents of Tshino, where crime is rampant, beat and killed a suspected robber. The area has experienced a spate of violent crimes in recent times and illegal foreigners were blamed for the crimes. Their properties were razed to the ground and they were chased away from the village.

This is not the first time that a criminal was killed by a mob at Tshisahulu either. Recently, a man who broke into a house at Tshisahulu Gombameni outside Thohoyandou met the same fate when residents caught him red-handed.

The late Calvin Fulufhelo Ramala, who was burnt alive at his sister's gate at Tshisahulu.

The fire that burnt Calvin Ramala to death after he was found with a stolen TV.

The broken security door where the plasma TV was stolen.

The body of Ramala is loaded into a government mortuary van after he was killed by angry community members.