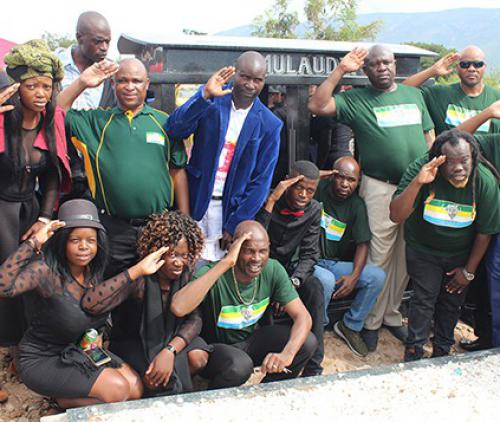 Children of the late Mulaudzi and members of  IRC, photographed at the tombstone, which was unveiled during Mulaudzi's funeral.

The late Tshivenda gospel music veteran and icon Paul Mulaudzi was buried during a funeral held at the El Shaddai Church in Nzhelele outside Louis Trichardt.

The musician-turned politician, who had more than 20 albums under his belt and produced many other groups, was 67 years old when he passed away last week of an unknown illness.

The ceremony was characterised by the beating of the Zionist drums and dancing. As per his wish, the casket passed via his church before being buried at Tshituni cemetery. The funeral followed a memorial service held in his honour at the Makhado College of Education on Friday.

Drama ensued during the funeral when the burial nearly became a political battlefield, with the ANC and the International Revelation Congress claiming ownership of the late musician. Mourners who knew Mulaudzi as IRC Limpopo candidate were surprised to find the hall where the service was to be held decorated in ANC colours.

An argument ensued and it took the wisdom of the Vhembe District Music Forum chairperson, Dr Roxley Masevhe, and other interested parties not to politicize the funeral.

Well-known musician Khakhathi Tshisikule explained the party's relationship with the late Mulaudzi, saying he was number 7 on the Limpopo IRC’s party list of candidates for the forthcoming elections. He said he was not shocked by the conduct of the ANC as they were not comfortable in the presence of the IRC. "We know they are very desperate, and they wanted to use Mulaudzi's funeral as an election campaign platform. They know full well that Mulaudzi was ours until his end. We had to reschedule our manifesto launch because Mulaudzi was sick.”

He eulogised Mulaudzi as a pillar of strength to their party, saying he had brought many to the party through campaigns countrywide.

Speaking during the service, Sharon Ravele, the station manager of Phalaphala FM, the station that launched Mulaudzi's musical career, urged the family of Mulaudzi to keep his legacy alive by continuing to produce his music. She described his death as a big blow to Tshivenda gospel music. She said the station would go all out and assist artists in the fight against piracy, which she said was reducing artists to nothing.

Pall bearers carry the casket of the late Paul Mulaudzi to the church where a service was held in Nzhelele.