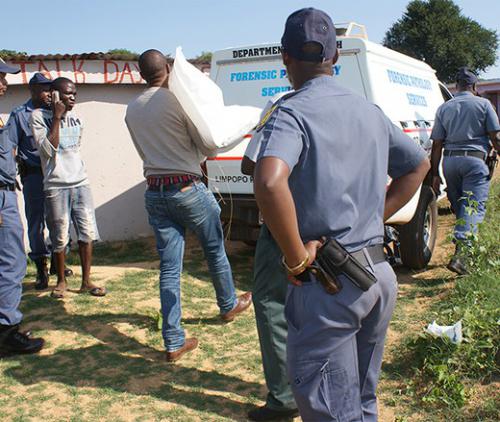 The body of the little child is being carried to a mortuary van after it was dscovered at the local crèche.

Crime at Mutsha Khwekhwe outside Louis Trichardt has become a thorny issue that the community is struggling to deal with. The area has been overwhelmed with violent crimes such as murder, attacks on residents, rapes and robberies, among others.

Many suspects identified by the community have met the wrath of the community, with some even succumbing to their injuries sustained during mob justice. The community has been trying to inform the community about crime by holding meetings, but nothing seems to be working.

The past weekend has been described as one of the worst, with several crimes being reported from Thursday evening until Monday morning. This has angered the community, who has already tried many things to eradicate the scourge of crime in the area.

On Monday, everything in the village came to a standstill, with schools and shops closed for business. No transport was available as the road was barricaded by burning tyres, stones, scrap metal and other rubble.

Community leader Mr Patrick Madaba said crime, and particularly violent crime, was always on the increase. "We are tired as a community. Many of the crimes are happening because we do not even have electricity in some parts of the village, which gives cover to criminals. This weekend was the worst and many law-abiding community members have suffered at the hands of criminals.”

He added that they did not have leadership and their wish was that the royal family would initiate an interim structure to restore order in the village.

“We have decided to send a memorandum of our grievances to the royal council and we hope that the royal family will listen to us and install a chief. It has been 11 years without our having a chief," he said.

Drama ensued at the traditional offices when a headman from the royal family shouted at residents. An argument ensued and he nearly beat one of the community leaders. Only intervention by the police, who were there, saved the day. At the end of it all, the old man calmed down and apologised to the residents.

Meanwhile, while a section of the community was busy at the traditional offices at Mutsha, a large group was searching for a little child who was reported missing in the village. The lifeless body of the 18-month-old child was later found in dense bushes at one of the local crèches.

At the time of our going to press, residents were still planning a follow-up meeting where all the structures would sit down and chart the way forward on how they can overcome the scourge of crime.

Limpopo police spokesperson Col Moatshe Ngoepe confirmed that a case of murder was opened after the lifeless body of a child, with multiple wounds, was found. "Initially a missing-person file was opened in respect of the missing child, who was reportedly sleeping with the father. The father is alleged to have gone to the toilet and when he came back, the child was nowhere to be found.” He added that the child was staying with his father after he separated from the child’s mother. Ngoepe further indicated they had launched a manhunt for the killer or killers.

Anyone with information that can lead to the arrest of the suspect(s) involved in this matter, can phone Col Chabiseka Michael Baloyi at 082 565 7345 or the crime stop number 0860010111 or the crime line SMS 32211 or the nearest police station.