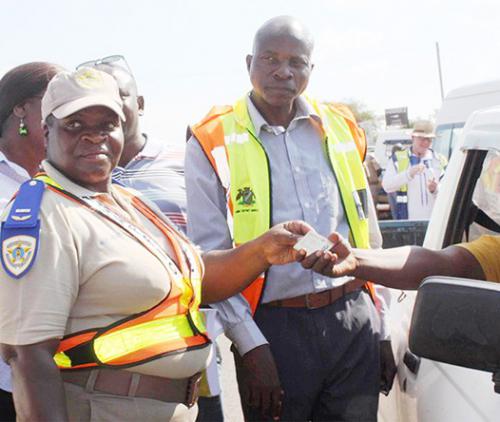 A traffic officer checked the validity of a driver's license and outstanding traffic fines of a motorist, while Cllr Joe Chavani (right) and some councillors look on.

Officals out in full force on the roads this Easter

Traffic and police officials in the Vhembe region will be out in full force and on alert this long weekend to ensure smooth traffic flow.

During the launch of the Vhembe District Easter Campaign at the Matatshe Crossing near Vhufuli on Monday, Cllr Joe Chavani, the portfolio head of community services, called for high visibility of traffic and police officers on the roads.

Communities who attended the event were told to remember those who had died during previous Easter weekends. Chavani said most of the accidents that occurred on the district's roads were due to motorists driving under the influence of alcohol, driver fatigue, speeding, stray animals and unroadworthy vehicles.

After the formal event in the Apostolic Faith Mission Church in Tshitereke village, traffic and police officers, accompanied by some councillors, staged a road block at Matatshe crossing, looking for driver and vehicle fitness, outstanding road traffic fines and those found guilty were escorted and locked up in a police van.

Chavani urged motorists to ensure their vehicles are roadworthy, that they adhere to the speed limit, avoid driving under the influence of alcohol or drugs and avoid use of cellphones while driving.

Representing the taxi council in the Vhembe region, Mr Balanganani Shandukani said no accidents involving taxis had been recorded in the area during the past 10 Easters. He warned the taxi drivers, however, against overloading and unworthy vehicles. He said that those found guilty of any offence would face the might of the law.

Throughout the Easter period, several operational centres will be manned in Vhembe. They will be situated at Dzindi and Xigalo in Thulamela, the Louis Trichardt four-way stop on the N1, the Mphephu four-way stop, Bokmakierie on the N1 and the Sasol garage at Tshilamba.