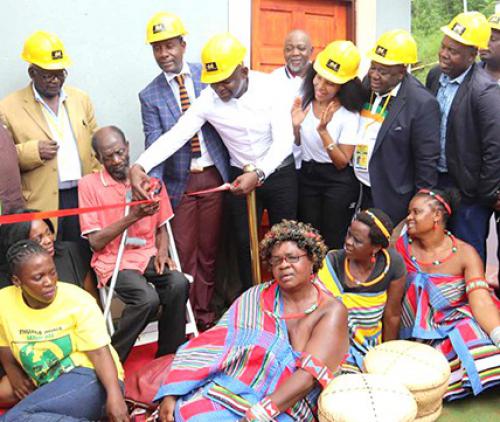 The life of a retired, disabled SANDF member, Mr Frans Mavhina, and his three children in Mbilwi village have changed for the better, following the handing over of a decent five-room house a fortnight ago. The house was built by Afribiz Invest.

The chairman of Afribiz Invest, Mr Colleen Mashawane, said that his company had a housing programme that focused on restoring the dignity of people, especially child-headed families, disabled people and elderly citizens.

He said that with the launch of Afribiz housing programme in 2017, they had already built and handed over 15 decent houses across the country and said this year alone they were targeting to build 30 houses. “We prioritized the elderly people, because they can no longer afford housing on their own and we also furnish and electrify the houses that we are donating. We are helped by community structures in such villages that assist up in identifying the needy that will benefit from our programme,” said Mashawane.

The 70-year-old Mavhina, who walks on crutches, said life was hard when the mother of his five children part ways with him and he was forced to live with his three children in an old and dilapidated two-room house. He said he was worried that no privacy existed between him and his children. “I am happy that both my dignity and those of my children will be restored, following the five-room house that I received,” said the jubilant Mavhina.

Thovhele Gole Mphaphuli, who officially presented the house, said that he was thankful for the way Afribiz Invest had responded positively in attending to the plight of one of his residents. “We cannot stand on the side-lines when the poor in our communities are without a roof over their heads. As traditional leaders, we are excited that poor people without better houses are getting decent houses,” said Thovhele Mphaphuli.