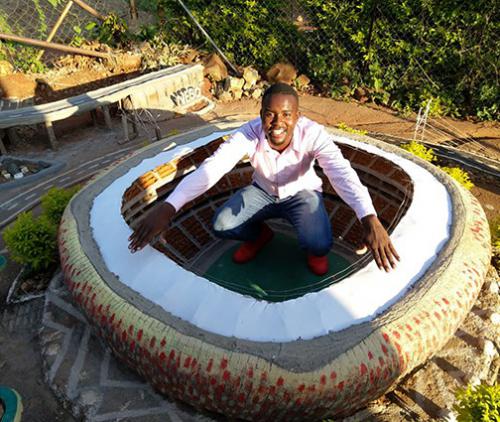 A scale model of the Johannesburg based FNB stadium, also known as Soccer City, built by Mulalo Nego Negondeni at the back of his family home in Mukula, has finally received recognition from Stadium Management South Africa (SMSA).

The scale model was built using recyclable waste material such as plastic, cement and cardboard. A few weeks ago, pictures of Nego and his model stadium started trending on social media and ended up reaching the eyes of Dr Jacques Grobbelaar, who is the CEO of SMSA.

“We have invited Nego and three family members to attend the Absa Premiership match between Kaizer Chiefs and Orlando Pirates on February 9th at the FNB Stadium,” Dr Grobbelaar said in a statement that was published on the SMSA’s website. Grobbelaar and SMSA will sponsor Nego and his family members with transport to and from Johannesburg, accommodation, a stadium tour and tickets to watch the match. “As part of our CSI initiative, SMSA Trust will assist Nego in furthering his education in Civil Engineering where he is currently enrolled at Vhembe TVET college at the Makwarela campus in Thohoyandou,” he said.

Grobbelaar said he was impressed by Nego’s entrepreneurship and SMSA was very excited to host him and his family for the derby on 9 February.

A very excited Nego said he started his project in 2006, imitating some of the stadiums Germany was using to host the World Cup. In 2008, he fell in love with the architectural design of the FNB stadium. It took him seven years to build the FNB scale model.

“After so many years, my dream is finally coming true and people are starting to recognize my work,” said Nego. “I am so grateful, and I feel honoured too.”