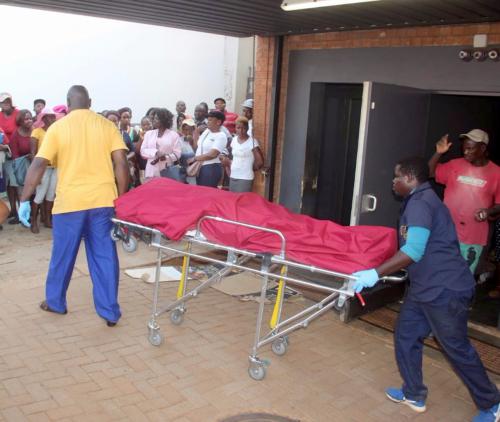 The  body of the man is taken out of the building in Thohoyandou.

Death could not stop them from casting their bets

Gamblers at one of the betting shops in Thohoyandou were left in a state of shock last Thursday when one of the people there died while waiting for his turn to place his bet.

The incident happened at Betta Betts next to Spar in the Mutsindo Mall at around 13:30.

The man has since been identified as Mr Aubrey Radzilani of Manamani outside Thohoyandou. The man was self-employed and ran a transport business.

News of the death of the man spread quite quickly and a number of shoppers and gamblers gathered at the scene. For hours, they waited for the body to be moved and could not cast their bets. The body was finally removed at around 16:00 and the gambling could continue.

A witness at the business said the man was a regular face there. “He was a very humble man. Even if you wronged him, he would just ignore it and go on with his gambling as if nothing had happened,” she said.

Another local man said they had been together at the United African Apostolic Church conference at Hamavhunga at the weekend. “We are still shocked. He was in good spirits and did not complain of anything. He passed on so unexpectedly and we are very saddened as his fellow church members,” he said.

A regular gambler who happened to be at the scene said they knew death was very sacred in the African tradition, but they could not go back home without placing their bets. “Death has its own number and many are going to bank their luck on that number,” said the gambler.

The crowd that gathered at the betting house where the man collapsed and died.