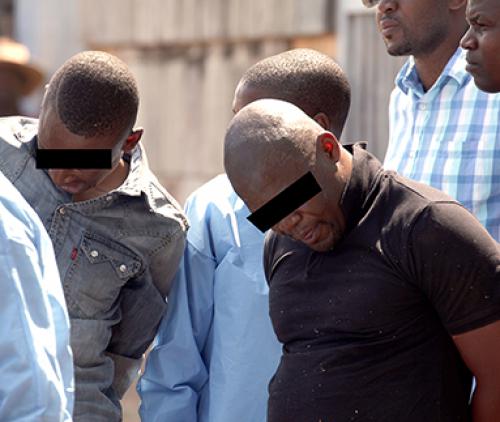 Not smiling any more … The two suspected armed robbers arrested in Louis Trichardt’s CBD during a joint operation between die police, the local town watch and members of the farm watch.

Two suspected armed robbers remain behind bars after being apprehended in a joint operation between the Makhado police, the Soutpansberg Town Watch and the local farm watch in Louis Trichardt’s busy CBD on Tuesday afternoon.

“The possibility of linking the two to several other cases of business robbery in the Makhado policing area can, at this stage, not be ruled out,” said local police spokesperson Const Irene Radzilane, following the incident. By the time of our going to press, no confirmation could be given that the two suspects had appeared in court yet.

According to Radzilane, the arrests followed a tip-off by a member of the public who reported a suspicious vehicle roaming the town’s CBD with the possibility of committing a business robbery. “The police and other local security structures quickly mobilized as part of an intelligence-driven operation,” said Radzilane.

The two suspects, traveling in a luxury Mercedes Benz, were confronted but tried to flee. They were, however, forced off the road after a brief chase and boxed in in front of the Dutch Reformed Church in Erasmus Street.

All the drama unfolded around noon and caused huge spectator value. Sprawled out on the hot pavement in the blazing sun lay the two suspects while the police thoroughly searched their vehicle. “Police were able to retrieve two pistols and eight live rounds of ammunition from the vehicle for which the two suspects were unable to produce a firearm license,” said Radzilane. She added that the Mercedes Benz they were traveling in also later turned out to have been stolen in Mokopane earlier this month.

“At this stage, the two men will be charged with the unlawful possession of firearms and ammunition, as well as for being in possession of a stolen vehicle,” said Radzilane. The two suspects are respectively aged 38 and 32, with the older man hailing from Nzhelele and the younger man from Soshanguve.

“We acknowledge all the support we received from all the stakeholders involved in the arrest of the two suspects. This is again proof that, by working together, we can achieve positive results,” said Radzilane.

Members of the police took their time in processing the stolen vehicle in which the two suspects tried to flee. Apart from their being arrested, the police also recovered two pistols from the vehicle.