Bass guitarist Mbevhana records third album in his own studio

Bass guitar player Nkanukeni Zebulon Mbevhana is busy recording his third album, which is to be released in September this year.

Mbevhana made national headlines when he built his own recording studio in his house last year at the age of 59. The shy-looking father of two boys from Khubvi village, approximately 25 kilometres north of Sibasa, said everything started when he made his own wooden guitar in 1978 and taught himself to play it.

“Within a year, people started to invite me to play during weddings and birthday parties. But my father was against it and destroyed my guitar, which was my only asset in my life then,” he said.

Even though he was so disappointed when his guitar was broken into several pieces and thrown away into the bushes, he knew deep inside his heart that, one day, he would make it in the music industry. Because he is from a poor background, however, he had to wait for more than 45 years before he could record his first album last year.

“I did not have money to record my music, so I decided to build my own studio in my house. I started by buying a bass guitar more than 15 years ago and started practising every day. I then bought a lead guitar, drums, a computer and, before I knew it, I had all the instruments I needed,” he said.

He built his studio by using egg boxes to soundproof the room, and it worked, he says.

“I have recorded a number of artists in my studio to date. I have also recorded my first album here,” he said. 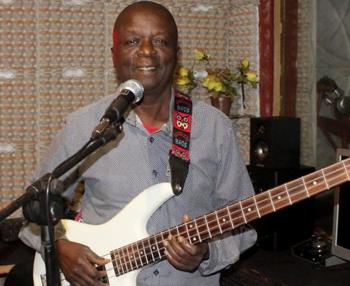