Osome shows his uniqueness through his music

Osome Feyn is all for embracing one's uniqueness. Born Vhuthu Tshisikule, the talented young hip-hop rapper from Sabina Plaza in Thohoyandou reckons that showing one’s true self is what makes human beings stand out from the crowd, and that is exactly what he strives for through his music.

“Being unique helps us feel more valuable, purposeful, happy, and truly connected. A strong and a positive self-image is the best preparation for success,” he said.

Late in 2020, Osome released his most acclaimed project, a seven-track EP called Painted, which gradually gained him national traction. For him, this was proof that all his hard work was finally starting to bear fruit.

In June last year, he released another EP, titled The Anatomy of Deeper Thoughts. This album contains four tracks, including a hit single called The Man. “This song is timeless. I love how people react whenever I play or perform it, even when they do not even know who Osome Feyn is.”

He says that taking the time to discover and allow one’s truest expression is very important. “I believe every single person in this world is trying out new things because nobody has ever lived 2022 before. Our steps, pain, peace and stories are not the same.”

Osome started his music journey at the age of 16 and always had a deep interest in music, wanting to equip himself fully with knowledge of the music fraternity. This, he said, enabled him to be more open to explore the industry before joining it.

“I finally got the confidence to write rhymes and make music, based on my experiences growing up as a kid in Venda. Since then, I have fallen deeper in love with music,” he said. 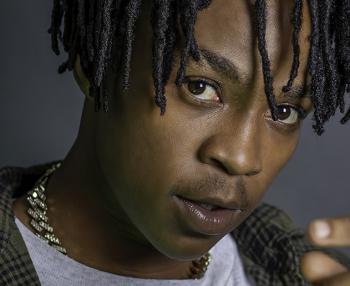 Rising hip-hop artist Osome Feyn believes that being unique is what makes people stand out from the crowd. Photo: Livhuwani Neluvhada.