Ndindi has found her new passion on social media

Ndivhuwo Ravele, popularly known as Ravele Ndindi on social media, has found a fun way of taking the edge off her studies.

The 25-year-old from Ha-Masakona outside Louis Trichardt holds a bachelor’s degree in science (BSc) and an honours degree in BSc physics, both obtained at the University of the Free State. She is also a tutor for high school learners from Grade 8 to 12 and will be doing an internship under RMB as from next month.

But in spite of her strict academic schedule, Ndindi makes time to just relax and have a bit of fun too. She has found a great outlet on social media, where she is fast becoming a big name as a content producer.

Ndindi is known on TikTok as “alla+@Ravelendindi”, where she has amassed 281.5K followers. She is also on Instagram (ndindi_xx), with more than 22.4K followers, as well as on Facebook (Ravele Ndivhuwo Ndindi), with over 8,566 followers.

So, how exactly did it all start for her? She tells us her story.

“It was out of boredom that I first joined TikTok back in 2019. I made a few videos, but they didn’t do really well. When Covid started in 2020, I was still making videos, which were still not doing so well, but I was okay with it because I was having fun. The first video that I made that went viral was one where I danced to Makhadzi’s song, Murahu. That was when my profile started receiving a lot of attention and my followers increased. It was a bit overwhelming because I was not used to the attention, and of course, the more followers you have, the more haters come with it.  Before, I was bullied a lot over the colour of my skin, but when I joined Tiktok my skin was the one thing many people fell in love with. Before I knew it, I was blowing up and people really loved me,” she said.

“Funny enough, I don’t consider myself as big as people think I am. It’s still a shock to me when I walk around, and people recognise me, and they are like ‘I know you from TikTok’. It is then that it clicks, how many people know me. What really touches me, though, is when people show me love and appreciation for what I do. Some even go to the extent of sending messages, telling me how much I inspire them. To me it really feels like this is something I’m meant to do. But being well-known was never part of the plan. I’m an introvert and really love science, so the social-media part is something I only do for fun.”

This is no mean feat for someone who started out just “fooling around” on social media. Ndindi said that, even though she had this new-found fame and made money from it, her love still lay in science. “Yes, I do make money by promoting different products and sometimes songs that are to be released soon, and I am hoping to work with more big brands that align with the content I do, like makeup brands, natural hair brands, face products that embrace dark skinned people, and such,” she said.

To the youth out there, she shares her message. “It’s very important to know who you are as a person. The first important step is choosing the right course to follow, so that you can have fun while studying. Regardless of the ups and downs, you still work hard because you have a bigger goal. When I am overwhelmed by books and school, I take a break and do my live videos on TikTok. After that, I feel energised and ready to go back to my books. So, that’s what my life pretty much revolves around,” she said. 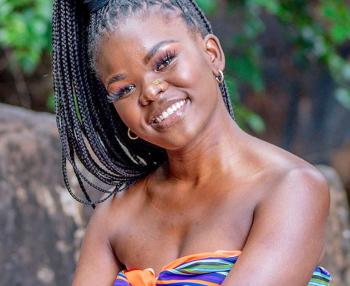 Ndivhuwo Ravele, or Ndindi as she is also known, is commanding a huge following on different social-media platforms. Photo supplied.