In school he was called ‘The Diamond Voice’ because of his strong voice, which made him stand out among his fellow orators. Years later, Mangalani ‘The Diamond Voice’ Mudau still leaves a powerful impression over the airwaves when he entertains Musina FM listeners.

Mudau commands a huge following and is counted among this border-town radio station’s best presenters. He says that his joining Musina FM was purely a matter of being at the right place at the right time. “I am a poet, and I had just recorded a song, titled Life is so beautiful. This was back in 2015. I went to Musina FM to submit my music, and when I arrived there, I saw a notice pinned to the building, indicating that the radio station was looking for someone to present their Top 20 Countdown programme on Friday nights. On hearing my voice, the station manager asked me to submit my CV, so I complied. I was invited to an interview a week later and impressed the panel so much that they immediately decided to hire me for the position.”

That was where his journey at Musina FM began.  Since he started in 2015, he has been moved around between various programmes; from the Morning Drive show, to Rhumba Beats, Divhavhupo and the Weekend Sports programme. Mudau is currently presenting The Early Rush show, which airs on weekdays between 06:00 and 09:00.

Besides being a presenter, he also occupies the position of programme manager at the radio station. His job in this capacity includes making sure that all the programmes are aligned to the broadcasting legislation and that presenters are doing their work professionally at all times.

Mudau was born at Ha-Mashau Bodwe, outside Louis Trichardt, and grew up in Nzhelele Ha-Mandiwana, where he attended school. “I did my primary schooling at Mandiwana Primary and proceeded to Tshala High School, where I matriculated and got the nickname, ‘The Diamond Voice’. I am proud and happy that my trademark voice is making me stand out in the broadcasting industry,” he said.

When he is not at Musina FM’s studio, Mudau likes to spend as much of his time as possible writing poetry and making music. Onstage, he goes by the name of ‘Mutavhatsindi The Poet’. He is working on a full album as we speak, which is to be released later this year. 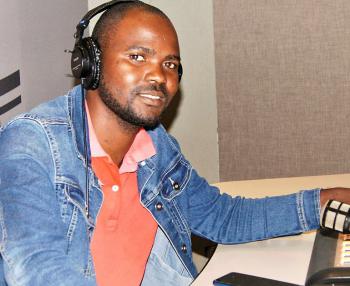 Mangalani 'The Diamond Voice' Mudau is loved and admired by all his fans at Musina FM.