Lazarus Matshusa, also known as Chitereke, has just released his first gospel album, called Muya Wanga U laulwa tadulu Volume 1, which translates into English as “My soul depends on heaven”.

The album consists of 11 spiritually uplifting tracks, including the title track, Muya Wanga U laulwa tadulu, Shela Muya, which means that we need God’s power in all our prayers, and Zwi do vhonala. All songs were composed by Chitereke himself and recorded at the Siwele recording studios in Rustenburg, in the Northwest Province.

Chitereke (38), who was born and bred in the mountainous village of Mabulo near Tshixwadza in Ha-Rammbuda, developed a love of singing in church when he was a boy. He sang in the church choir of the Zion Christian Church (ZCC) in Tshixwadza.

“My father, Johannes Matshusa, was a staunch member of the ZCC, and I grew up following in his footsteps. One of the local pastors, Azwinndini Lieba, heard me sing one day and was impressed. He encouraged me to nurture my singing talent,” he said.

He got the name “Chitereke” from the church leader, Mr Rollet Mulaudzi. “He used to say that I had the ability to make things happen at any church gathering, even if things were bad, because I could turn it around and make it happen the way people like it.” 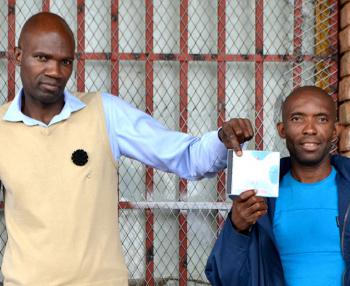 Gospel singer Lazarus Matshusa, or Chitereke as he is known, shows off his first gospel album, titled Muya Wanga U laulwa tadulu Volume 1. With him in the photo (left) is his promoter, Mr Collen Siaga. Photo: Silas Nduvheni.