Elisa Neguyuni firmly believes that her job as a financial advisor equips her with the skills that she needs to execute her part-time job as a radio presenter. She says that her full-time job places great emphasis on customer care and positive interaction with people, which she also applies when she slides behind the microphone at the community radio station, Musina FM.

Neguyuni, who joined Musina FM in 2018, says that broadcasting is her second love, next to being a financial advisor. “I worked at Nzhelele FM for a short period before I saw Musina FM’s advert for presenters on social media. I tried my luck and was called in for the interviews, which I passed with flying colours.” She started as a news reader for Musina FM and was later transferred to Tshidziki tsha mafhungo, a current-affairs talk show that is aired weekdays between 18:00 and 19:00.

For this ambitious lady, alternating between her respective responsibilities is easy enough. As her full-time job ends at around 17:00 in the afternoon, it gives her enough time to get ready for her job at the radio station. “At Musina FM, we work as a team so, by the time I get to the studio, my colleagues have already packaged most of the stories that I will be presenting on my show for the evening. As the radio station serves as the only mouthpiece for the community, we focus more on local matters and news that relate to the people of Musina.”

Neguyuni was an orator in her early school days. “I would stand in front of the class and orate unprepared speeches, and my teachers at Tshirenzheni Primary School were ever impressed. My gift for playing with words was further noted when I started winning debate sessions at Ramashia High School. I could stand before an audience without getting stage fright at all. Later, I realised that radio was in me and that is why I’m so obsessed with it.”

She says that having a passion for broadcasting if one wishes to succeed is compulsory. “There is no way you can succeed if you don’t love what you do. The only way to do great work is to love what you do. If you follow your passion, success will follow you, and you will, in turn, enjoy your work and always be happy in your job.” 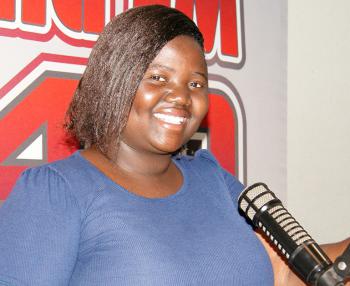 Elisa Neguyuni successfully juggles her two jobs as financial advisor by day and radio presenter for Musina FM by night.