What happened to Vhembe’s tshingondo (rhumba) megastar, Jonah Moyo? This is the question that music lovers have been asking themselves for the past two years. The answer is that Moyo has been travelling around the world, making music with his band, the Devera Ngwena Jazz Band.

The musician relocated to South Africa from his home country of Zimbabwe in 2004 and settled in Thohoyandou. Since then, he has been as part of the Vhembe region as the locals themselves, where he sells his music to the public. For many years Moyo was an integral part of the local entertainment fraternity, performing at various mega-gigs around Vhembe and beyond.

Limpopo Mirror has been tracing Moyo’s whereabouts for the past three weeks, only to find that he had returned to Zimbabwe two years ago. In a telephonic interview with him, the artist said that, although he loved Thohoyandou with all his heart, he had taken on the role of music lecturer at the Great Zimbabwe University in Masvingo in March 2020.

“I have seen it all in the music industry since I started with my band in 1980. We have travelled around the globe and released 44 successful albums, making us one of the most successful bands in Zimbabwe. Although music is my talent from God, I found it important to study towards it, giving me the advantage of being academically armed. The experience that I have acquired since 1980 to date broadened my musical knowledge, and that is why the Great Zimbabwe University had approached me to come back home and teach music to the students. I turned down this request for several years, but I finally gave in and went back home on 9 March 2020. Interestingly, I am now teaching music in Masvingo - the place where I launched my music career in 1980,” he said.

When asked if he did not miss his energetic dance moves on stage, Moyo replied: “Music is my life, and I can’t live without it. It makes me happy to work with young people because they are the future stars of our entertainment industry. Being a master of various guitars and keyboards, it puts a smile on my face when I see that my students understand what I teach them because most of the knowledge comes from my God-given talent, and not from books. We also perform and record music with my students, which is later played on the university radio station, called Campus Radio.”

He admitted that he missed the people from Vhembe and hoped to perform for them again soon. “Thohoyandou has been my home for 16 years, and I was happy to be part of the beautiful landscape and loving people. I miss my beautiful fans there, but I will meet them when the time is right. Watch this space, I will definitely organise a show for them to come and thank them for their warmth and love,” he said. 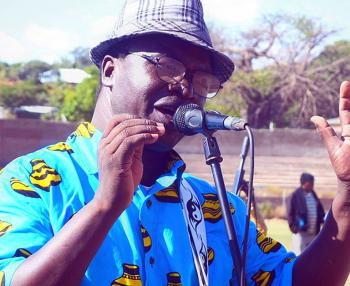