Queen Popoo takes another step up the music ladder

Ndo tshinyani is a plea to women not to abort, or give birth to and then kill their new-born babies. “Our youths have turned into killers of a sorts; they give birth and either kill or throw their new-born babies away. Those babies have the right to live, though they are voiceless. When I sang these songs, I acted like a baby pleading for its young mother not to throw it away,” Dzhadzhi said. The album includes songs like Mukondeleli, Weh dali, Makhosi and Besties.

“I am proudly born and bred in the Limpopo province and that’s why my fans call me Queen Popoo (Popoo from the word Limpopo),” she explained.

This rising star hails from Vondo village outside Thohoyandou. She discovered her music talent while she was still in her primary years and sang at her school assemblies. Later, she developed the confidence to follow her dreams and turn her singing talent into a career.

Her first album, My voice is my hero, was released in 2019, followed by her second album in 2020, called Ndi munangiwa, meaning ‘I am chosen’. Dzhadzhli composed and sang the songs alone. To perfect her music career, she studied Popular Music at the South West Gauteng College in Dobsonville. 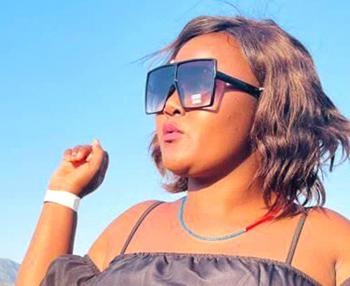