Cindy has a bright future ahead on national TV

Twenty-one-year-old Sendrella Ncube from Musina is fast becoming a household name on national television, with roles offered to her in all kinds of drama productions. Her latest role portrays a waitress in the famous SABC soapy, Makoti, which airs at 19:30 on Monday, Tuesday and Wednesday nights.

Makoti highlights relationship challenges and how best they can be addressed in our daily lives. She had previously also featured as an extra in Moja Love original docudramas, such as Ufelani.

Better known as Cindy in the entertainment world, she started her career at Musina FM, presenting the A re aganeng show on weekdays between 09:00 and 12:00. She also worked as a news compiler, reader and editor at Musina FM. “I worked at Musina FM for a full year in 2020, until I decided to venture into the television acting industry last year. This became possible for me after I joined the Naps Casting Agency, where I received training and role placements at television houses,” she said.

Cindy is also an artist manager and presenter on a YouTube channel, called Life of Twins, which reveals how identical twins relate to each other.

Cindy attended high school at the local Mopane Intermediate School. Here she realized that she had a special gift for entertaining people. “I always took on the leading roles of our school’s stage dramas and both the teachers and learners were impressed with my performance. I was also very active in debate competitions and did very well. My teachers encouraged me to believe in myself, and today I am happy to be reaping the rewards from their advice.”

She encourages young people to not give up on their dreams either. “The most important thing is to work hard towards achieving your dreams. Be dedicated and love what you do.” 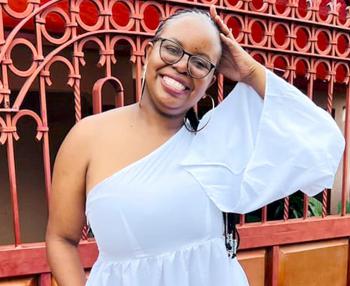 Sendrella Cindy Ncube from Musina has a bright future ahead of her on national television. Photo supplied.