Nothing can separate Rotlas from the airwaves

Rotondwa Nelwamondo, better known as Rotlas, is one of the most loved, experienced, and longest-serving presenters at local community radio station Univen FM.

Rotlas, who hails from Lwamondo Tshivhale near Thohoyandou, has a commanding voice that keeps listeners glued to the radio. Over the years, he has made a name for himself in the local radio broadcasting industry as a role model for many young, aspiring radio presenters. He is an all-rounder who has presented and produced nearly every programme since he joined Univen FM in 2012.

He explains how his radio journey started. “I joined Musina FM as a marketing officer in 2010, after completing my marketing degree. The following year, I presented a programme called Youth to the Future and later ended up as the station’s programme manager. In 2012, I was approached by Univen FM’s management and started off as a presenter for the weekend breakfast show on Saturday mornings. I also did the Early Rider show on weekdays between 03:00 and 06:00.”

Spending most of his week doing what he loves best, this think tank currently presents the Saturday Breakfast Show, which airs between 06:00 and 09:00. He also steers The Lunch Talk from 12:00 to 13:00, Mondays to Thursdays, keeps party lovers awake with The Natural Hits show (or the Bepha ri maswiswini show) on Friday nights from 20:00 to midnight, and seals his week with the Religious Talk show on Sundays from 14:00 to 17:00.

The secret behind his long stay and success at Univen FM is his love of radio. “Radio is my first love. I cannot live without it. There is nothing that I enjoy more than radio, and nothing can separate me from the airwaves. I feel fulfilled when doing what I love most behind the microphone. I am happy because young presenters who came after me regard me as a guide to give them practical experience, leading to their growth in the broadcasting industry,” he said.

Despite his busy schedule on radio, Rotlas also finds time to live out his love of music by making his own. In 2019, he released a successful gospel single, called Mudzimu ndi vhone, which features Changes. The song still enjoys fair play on both regional and national radio stations. 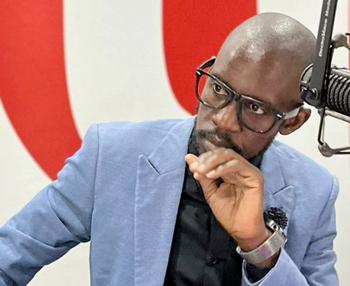 Rotondwa Rotlas Nelwamondo is one of the most loved, experienced and longest-serving presenters at Univen FM. Photo supplied.