Hulisani Begwa, a talented woodcarver from Tshandama, proved just how far a little bit of initiative, combined with a lot of hard work, can take you. Begwa uses the wood from dried-out, fallen trees, which he collects from the bush, to make his beautiful pieces.

“I started sculpting in 2008, when I was only 10 years old. At first it was nothing more than a pastime, but then I began to realise that I really got a knack for it. My father, who makes a living from woodcarving, taught me everything about this trade and encouraged me to nurture my talent,” he said.

Begwa’s work can almost be classified as a form of fine art. He makes anything, from real chairs and tables to animal and human figures, bowls, trays, and big wooden spoons, to mention but a few, and his work sells very well. He believes that part of his success is because his products are easily accessible and affordable. “I don’t charge that much, and this makes business sense to me. To tell you the truth, I have never gone to bed hungry since I started,” he said.

He has a word of advice for those with special skills to use it, instead of sitting around and waiting for employment. “Your skills can become your employer, and if one uses it on a large scale, it could also create jobs for others.”

His customers include people from local communities, as well as tourists who pass the spot where he exhibits his handiwork along the main road. “Even when people do not buy my work on a daily basis, I am able to survive on what I earn from my crafts,” he said. When it comes to his job, he truly enjoys what he does. “I see it more as a hobby than a moneymaking venture,” he said.

Begwa is looking for someone who can help him promote his wood carvings at a national level. “I believe that this will mean a breakthrough for my career, as thousands of people will learn about the good work I’m doing here in Vhembe. After working in the dark for so many years, I hope there will now be a light at the end of the tunnel for me.” 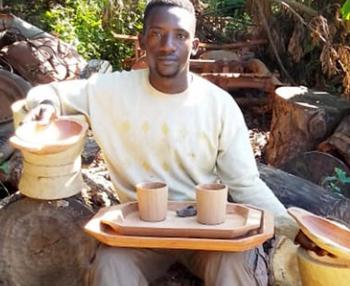 Hulisani Begwa proved that a bit of initiative and a lot of hard work can take you far in this life. Photo supplied.