Takalani “The Dread Mash” Mashau has come up with just the right ingredients to get music lovers swaying to the soothing rhythm of his melodies.

“With reggae, the music should make people get to their feet and dance,” he said. “Music should excite people; it should make them happy; it should encourage. It should also teach people lessons about life, so that they can respond to certain situations in different ways.”

His latest album, Pick up the telephone, was released a fortnight ago and already gets massive airplay with songs such as Ngoma lungundu, Satisfaction, Pick up the Telephone, In our lifetime, Milamboni ya babele, Natty Dread rock, and Sister Lonnah.

“I am reviving roots reggae with my sounds and lyrics,” he said. “My music is sort of a ‘back-to-my-roots’ experience.”

He has been composing, recording and releasing music since around 1999, when he used to sing in a band called African Dread. Vho-Nengovhela, a local businessman, bought him his first guitar and he started taking lessons until he excelled in lead, bass and rhythm guitars.

“Along the road I was asked to lead the reggae band Rainbow Dread. This was when I honed my leadership and vocal skills to the extent that our group performed at many social gatherings.”

The following year (2007) Rainbow Dread changed their name to The Receptors. They also performed live music with many other major artists. Later on, he released is own album, titled Avhatameli Mashudu under the name Takalani and the Frontlines. This album was succeeded by Sodom and Gomorrah.

Pick up the Telephone was recorded and released under the Adziambei Music Academy label. He worked with artists such as Joseph Tshisevhe, Kenny Murano, Shufflers Ragimana, Steve Netshishivhe, Lufuno Munzhelele, CJ Munyai, and Khakhathi & Friends. 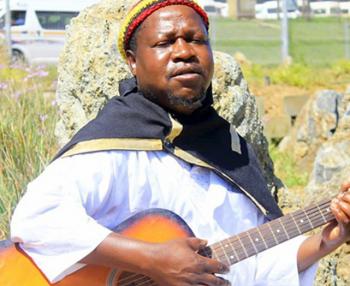 Takalani “The Dread Mash” Mashau's latest album, Pick up the telephone, was released a fortnight ago. Photo supplied.