“When people see me, they truly believe that I am a woman. It is only when they hear my voice that they realise that I am a man,” says rising local comedian Mpfariseni Ramulondi (26), better known as Vho-Nyawa in the entertainment industry.

Ramulondi, who hails from Vondo village outside Thohoyandou, is known to dress up like a woman – complete in dress, with traditional beads around his neck, makeup on his face, a pair of ladies’ sunglasses and doek on his head, and woman’s sneakers on his feet.

All this for the entertainment of his crowd. The funnyman says he wanted to do something different that would make him stand out from other comedians. “The majority of local comedians dress up like old men when they perform their acts. I realized that I would have to come up with something creative if I wanted to take my career to a different level. Fortunately, this worked out well for me. People like my jokes, coupled with the way I dress.”

Ramulondi drew inspiration from his late father. “My father, Nngwedzeni Ramulondi, would leave spectators in stitches with his comic dance moves. We would dance together, and I then realized that I could easily venture into the entertainment industry,” he said. “I used to be a great entertainer during my primary and high school days too. Teachers and learners were always laughing at everything I did. I started getting invitations to perform at local social gatherings, and things improved even more for me when I got big gigs outside my village.”

He previously worked with Vhakoma Video Productions and Alingo and the Babes as a dancer before he ventured into a solo career as comedian. Although he says that this is not an easy road to success, he foresees a bright future for himself in the entertainment industry. “Judging from the huge demand and bookings for performances, people undoubtedly regard me as one of the best comedians to have ever emerged locally,” he smiles. “I would like to thank my fans and everyone who supports my career as a comedian. Hopefully, soon I will be counted amongst the best in South Africa.” 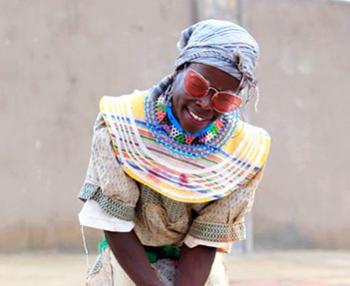 Rising comedian Mpfariseni Ramulondi (26), better known as Vho-Nyawa, entertains his fans by dressing up as a woman. Photo supplied.