Many people know her as a sportswoman who has coached primary school netball and volleyball teams from as far afield as Cape Town, but Khathutshelo Mudogwa (27) has a surprising other side too.

Mudogwa has ventured into the music industry and is already reaping the rewards as a local Tshivenda poetry artist, performing under her stage name, Mudogwa Mukololo wa Afrika.

“People know me better as a sports lady who had worked closely with Mavu Sports Development to empower young people in our country. Although I love sports whole-heartedly, the music bug kept on troubling me, and I could not stand the pressure anymore. So, I decided not to ignore my second calling any longer to have some peace of mind,” Mudogwa said happily.

The young musical poet, born and bred at Ha-Masia Tshikwarani outside Elim, has released her debut poetry music album, titled Zwi re khalini ya ndivho. The album enjoyed airplay on local community radio stations, including Phalaphala FM, within the first week of its release. “This has encouraged me to take my music career seriously, because everyone knows radio stations only play good music,” she said. “I have also received countless calls from people who told me that my music is good and said that I must never look back again. This meant a lot to me, and I see a bright future ahead of me in the music industry.”

She encourages other young women not to give up on their dreams. “The most important thing is to love what you do and to plan your time effectively. Yes, I’m still involved in sports, but I have ventured into the music industry while running a small business at the same time.”

The album, which is available from all major online stores, was recorded, engineered, arranged and produced by Ananias Begwa at Rise Up Recording Studio. It carries 10 sizzling tracks, including Lupfumo lwa Afrika, U mmbulahelani, Khuthe mulutanyi, Vhumatshelo and Midzi yau. 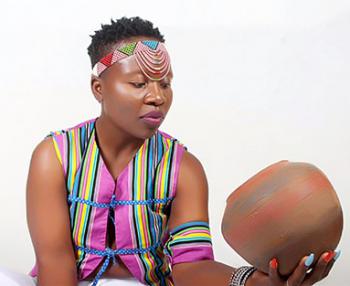 Khathutshelo Mudogwa, also known as Mudogwa Mukololo wa Afrika, is making a name for herself on the poetry music scene. Photo supplied.