Feature “Emlane Ivo” Chabani (24) is stirring up another musical storm in the cyber sphere with his latest mixtape, leaving fans screaming for more.

Emlane Ivo, who grew up in Malamulele Location, is a soulful hip-hop artist. “I discovered that I was a rapper when I was in Grade 9 at Ntsako Matsakali High School in 2012,” he said. “I used to rap for my friends and close family, and everyone cheered me on. They always told me to record my songs, so I eventually recorded my first song, I do It for my future, in 2014 at Focus Studio.”

When he got to the point where he shared the stage with seasoned artists such as Mizo Phyll, Ramzeey and Makhadzi, he knew that he had finally made it. “It was a dream come true to share a stage with those big names,” he said.

Emlane Ivo felt very honoured when Tonic OG featured him on the hit song, Get the Rands, alongside Mike Tuney.

“It’s God’s plan (for me) to work with people who have made it to the TV screen, just like Mike Tuney and Tonic OG,” he said. “It really gave me a huge fan base, with 14k followers on Facebook.”

Emlane Ivo is a third-year Bachelor of Science student at the University of Venda, specialising in microbiology and botany. He believes that his talent is still growing and that it will soon take him around the world. “The kind of music that I am recording and releasing these days is totally different from the first songs I released way back in the beginning of my music career,” he said. “It’s promising. I feel that my star is shining.”

Whenever Emlane Ivo feels down, he only has to put on some music to lift his spirt again. “To me, it is like therapy,” he said. “All my problems seem to dissolve just by listening to good music.”

He has just released a mixtape, called Under Pressure, which is available from online digital stores for streaming and purchasing. Hit songs include, among others, Night Shift, Focus, The Sauce, Vana Proud, Smiling, Gimme Ears, Ain't Loyal (ft Chezman), Shawty and If I Die Today. 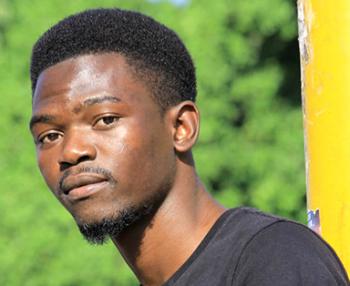 Emlane Ivo is stirring up another musical storm in the cyber sphere. Picture supplied.