What happened to Ishy Malala?

Where is Ishy Malala? This is the question music lovers have been asking themselves for the past 15 years. Malala, of U taliwa zwi a vhavha fame, vanished into thin air after releasing his third album in 2005.

After a lengthy investigation, Mirror tracked down the once-famous star and found him at his home village of Tshaulu Tshitumbe, outside Thohoyandou.

“Tell my fans that I’m still alive and kicking. I know that many people are worried about me because they don’t know where I am. You know when a celebrity just vanishes, people would be asking themselves many questions that they would not be able to answer,” said Ishy with a bright smile on his face.

Asked what he had been doing for the past 15 years, Ishy was quick to respond: “I have never been out of the music industry. It is true that I have not recorded a single album for the past 15 years. However, I’m seriously involved in music through my recording studio, Tshau Records, that I have established here at home. I now play instruments, record, arrange, master and produce many artists who are big names in the local music industry. Although I can’t remember all the artists because they are many, some of them include Alpheus Ramavhea, Esther Badzhi, Wilber Mudau, Asnath Mulaudzi, Tendi Matumba, Zacharia Munzhedzi and Talifhani Munyai, to name but a few.”

He said he had no intention of releasing an album anytime soon. “My recording studio keeps me busy in such a way that it is difficult to get time to compose my own songs. Sometimes I work throughout the night and on weekends because many artists prefer my studio because of its unique, clean and strong sound.”

Ishy started his music career in the early nineties with Tendani Nephawe, who is today famously known as Mutendas. He shot to stardom when he released his debut album, Masakhane, in 1999. The album contained the hit song U taliwa zwi a vhavha, which resembled a national anthem on Phalaphala FM and in public spaces. Masakhane was followed by his second album, Vhutshilo, which was released in 2003. He sealed his fame with his third album, Mphemphe, in 2005. 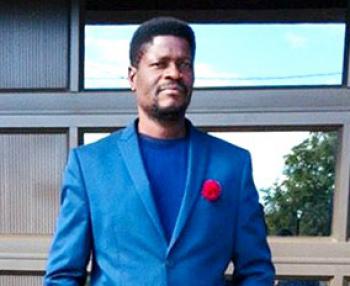 Ishy Malala of U taliwa zwi a vhavha fame is quietly shuffling between his roles as a recording studio owner, sound engineer, producer and family man. Photo supplied.