Thabo Modillane, a locally born artist, is bursting at the seams with happiness since he was announced as the overall winner of the Ghorbany Annual Art & Design Award 2021 on Wednesday, 9 June.

Modillane submitted his painting in March this year. “I always had a feeling that I would win this competition, because I started preparing my artwork in January. The painting captured a moment that is relative to us as South Africans,” he said. “Now I have the opportunity to display my art at Ghorbany Benmore Gardens Gallery in Sandton.”

He said that the competition had been a lot fiercer than people might think, as he was pitched against some amazingly talented artists who had also submitted fresh, authentic creations. “It was a tough competition because all 23 participants were great, but I thank God that my hard work finally paid off.”

Modillane’s winning painting is titled Making plans. His inspiration came from observing the many struggling, hardworking people trying to make ends meet on the streets of Pretoria. “Some of these people do hard labour for little money,” he said. “I believe that struggle is an inherent part of life, and even helpful for growth, but nobody wakes up in the morning hoping for a struggling existence. And yet, here these people are, each one of them continually struggling to make a living.”

Ghorbany, in announcing the winner via a short social-media press release, said “We are extremely grateful to all 23 great entries. It was so difficult to choose the winner and after hours of studying them, we came to the moment of celebrating Mr Thabo Modillane as the winner of this competition. He has captured a moment in which we see the purity, struggle and joy together that we are all experiencing in our great country, South Africa!”

Modillane was born in Madombidzha village but currently resides in Pretoria. He is, in terms of authenticity and creativity, an accomplished artist whose work is gradually filling the walls of great offices and homes all over the country.

He discovered his talent as an artist when he was only nine years old, when he would draw pictures for his teachers, who were always very impressed with his art.

He studied fine art at the Tshwane University of Technology and said he used art to express his personal life experiences, as well as life in general as he saw it around him. Some of his works have been sold to the Art Bank of South Africa and are now exhibited at the Bloemfontein Museum. He will also represent South Africa at the Modzi Arts Festival in Zambia in August this year.

Modillane was chosen to facilitate a public art installation that was presented by the US Embassy and Consulates in South Africa at American Corner in Pretoria, at the E’skia Mphahlele Library, on 12 May this year. “I was further selected as a new participant in the Creative Block Programme by the Spier Arts Trust (Nando’s Art Collectors) from June to August this year. So, I am really grateful, as my world continues to open up with great opportunities for me.”

Thabo Modillane is available on most social media platforms and can be reached either on modillanethabo@gmail.com or Tel 071 512 5332. 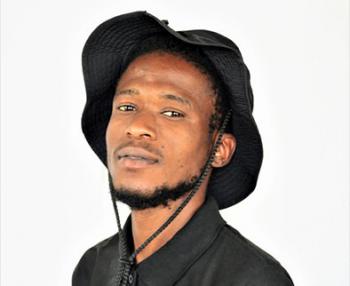